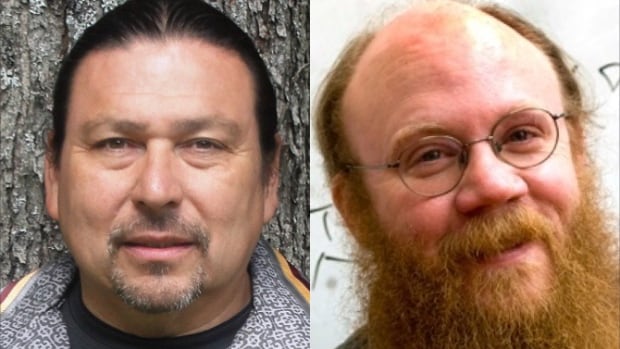 Norvin Richards remembers the first time he heard the Wolastoqey language – and how much he smiled over the years in the company of those who helped him learn it.

The Massachusetts Institute of Technology linguistics professor was attending a conference in Connecticut 15 years ago when he met elder and language guardian Imelda Perley and her friend and fellow linguist Roger Paul.

“If you’ve heard it speak, you know it has this lovely sort of singsong cadence that made me, as a linguist, think, ‘Oh, I’d really like to learn to speak that way,'” Richards said. “It’s just such a beautiful language.”

He and Paul are part of a larger effort to save the Wolastoqey language, which Statistics Canada says has only around 750 speakers left.

Elders pass on language and a nickname

Richards said the language appealed to him, but it was getting to know fluent speakers like Paul and his uncle, the late Raymond Nicholas of Neqotkuk, that hooked him.

“It’s a culture that traditionally seems to place a high value on speaking well, being a storyteller, being a prankster,” Richards said. “And so when these people get together, they have a wonderful time talking, and it’s wonderful to be there.”

Richards spent a sabbatical in northeastern New Brunswick, learning Wolastoqey from “Uncle Raymond” and Imelda Perley, recording traditional stories and trying to understand the rules of the language.

Paul, said alumni give nicknames to their “favorite linguists who show up,” and Richards is one of them.

His nickname is Mehqituwat, which means “has a red beard,” said Paul, who studied with Richards at MIT and now teaches at the University of Southern Maine.

“Normally the word ‘linguist’ in a community gets a lot of people angry because we once had the wrong kind of linguist come and tell us we didn’t know enough about our own history,” Paul said. .

“But when you have linguists like Mehqituwat come and they’re wonderful people and they fit right into our communities…we kind of adopt them and give them our pet names.”

Richards is now heading for another sabbatical and has set herself the goal of becoming a fluent Wolastoqey speaker by the end of it.

Paul said his friend “already communicates very well” and is close to fluent.

“He even lies to Wolastoqey well,” he joked.

‘It is not too late’

Richards and Paul know the Wolastoqey language is under threat, and both attended a language conference in Fredericton this fall focused on recovery.

“I left feeling better than I had ever felt before because I watched the youth presentations,” Paul said.

Richards agreed that it is the young speakers who will determine the survival of the language.

He knows from his work with the Wampanoag of Massachusetts, relatives of the Wolastoqey, how difficult it is to try to revive a language that has died out.

“They don’t have any speakers,” he said. “But we have many documents, including a complete translation of the Bible and a lot of religious literature and a lot of documents written by native speakers. The Wampanoag are very interested in reconstructing their language from these documents.”

By comparison, with 750 speakers, the Wolastoqey are ahead in reclaiming and revitalizing their language.

“It’s wonderful to be here surrounded by these elders and to be reminded in a way that this language still exists, that there are still fluent speakers, that it’s not too late,” said said Richards.

Paul said that when he was young he didn’t appreciate the importance of growing up in a proud indigenous family who refused to speak English and only spoke to him in Wolastoqey.

He didn’t hear English until he was five or six years old, he said, when he “went to day school for a bit”.

Paul remembers going every Saturday to his uncle Raymond’s house in Neqotkuk or Tobique, where the elders would gather and teach him words in Wolastoqey.

“I should sit there and get coached by the elders and tell me what to learn and what to teach.”

At the time, he was “just a young buck, not even knowing where my cock was half the time,” Paul said, remembering how he rolled his eyes at the elders.

Now as a linguist and lecturer at the University of Southern Maine, he wishes he could remember everything they taught him.

“Uncle Raymond had a word for what the bushes looked like after the moose ran through them. And I promised him I’d remember it. But rest his soul, I don’t remember that one. “

Paul doesn’t believe the latest census figures which show there are 750 Wolastoqey speakers, saying he thinks it’s more like 200 or 300, but he believes his language will survive.

“I remember my uncle saying to me – he said to me in the language, ‘One day you’re going to be grateful for teaching you this boy.'”

Now that he is a language teacher, Paul understands the importance of what Uncle Raymond was telling him.

“Every day I get up to come to work, I hear those words in my ear,” he said with a laugh. “Yeah, okay, you were right.

English-language schools will stay away on Monday – Morrisburg Leader