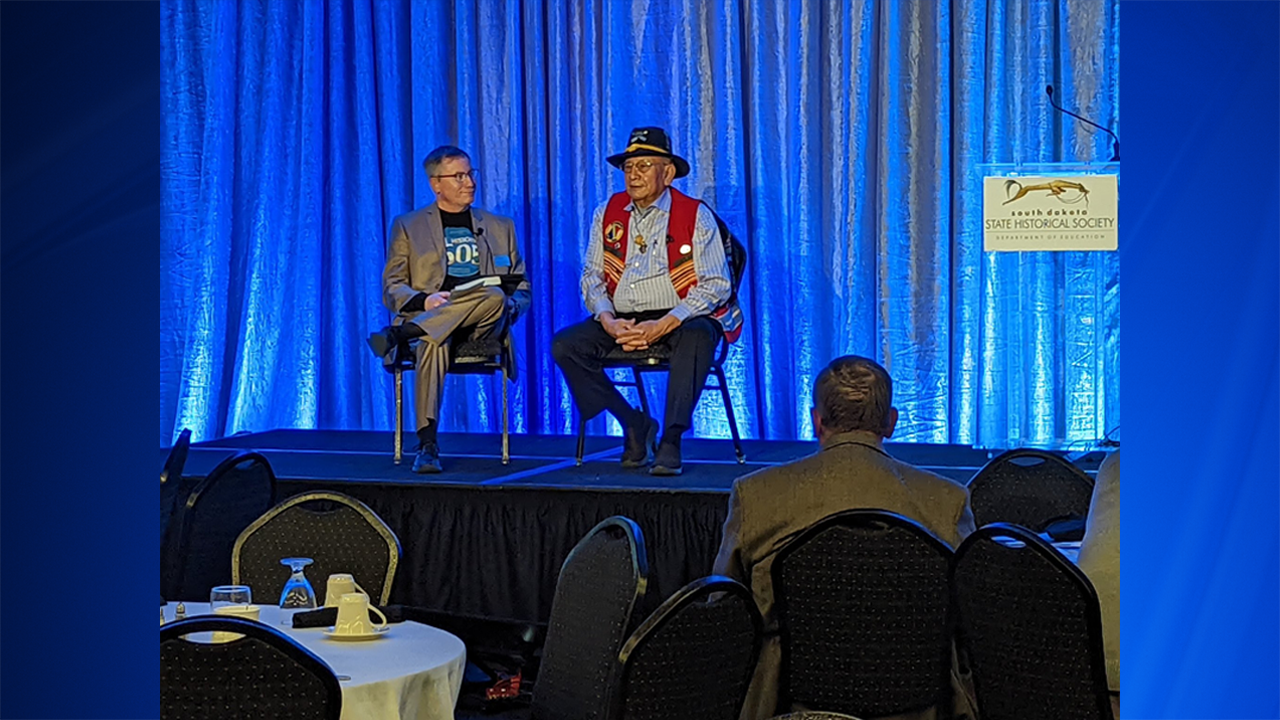 Francis Whitebird spoke of the misunderstanding and misinterpretation of Lakota language and names by non-Lakota speakers, as well as his father’s service as a World War II Lakota code-speaker, his own time as a US Army combat medic in Vietnam and his sons. military service.

The conference theme was “Fighting The Good War: South Dakotans in World War II”. Earlier this year, the Legislative Assembly considered allowing a code-speakers memorial to be built on the Capitol grounds in Peter, but tabled it to allow for a master plan to be developed first. for the complex.

Whitebird, who served as a director of the company for nine years, now lives on the Rosebud Indian Reservation. He served as Commissioner of Indian Affairs during the administration of Governor George S. Mickelson, who, along with tribal leaders, proclaimed a century of racial reconciliation in 1990. Mickelson and seven others died in a plane crash of State on April 19, 1993.

Ben Jones moderated the conversation with Whitebird for a possible future broadcast of the 605 History podcast series. Jones is the director of the company and served 23 years in the US Air Force, including teaching history at the USAF Academy in Colorado Springs.

One of the points made by Whitebird was his opinion that the code-speakers of World War II rose to a higher place in history than the famous Lakota fighter Crazy Horse, who helped defeat a group of soldiers from the U.S. Army in a 1976 battle in what is now Montana.

“The greatest generation Lakota code-speakers are the greatest Lakota warriors. They won the war. Crazy Horse lost theirs. That’s how I describe it,” Whitebird said.

Among the other highlights of his 45 minutes on stage:

On his identity: “People here today had made presentations (about) the Lakota Sioux. I am not Sioux Lakota. I am Lakota — period. To finish.”

On how the mistranslations happened when American soldiers arrived on the Great Plains in the 1800s: “The Lakota guy doesn’t speak English, and the English guy doesn’t speak Lakota. Just as I told you about Lakota, he didn’t understand it. So how do we communicate? Arm waving and all that kind of stuff, finger waving.

On the mistranslation of the name “Crazy Horse”: “You must use a specific English language. Correctly translated, it means, ‘He owns a foolish horse.’ That’s what it means.”

On the misinterpretation of the name ‘Sitting Bull’: “The correct translation is, ‘He is greater than the bull of the herd.’ When you look at his accomplishments – he protected the family, he’s a great warrior, a spiritual leader – he did all of that. Amazing person.

On non-Lakota expecting Lakota to translate their Lakota names into English: “When you saw a presentation here with a Japanese name, why don’t they translate their names? Or some of your names, some of you who are German? It means something, milking a cow or something.

On non-Lakota expectations that Lakota know their language and culture: “What is your heritage? Do you speak your language? Do you speak it fluently? Why are we applied to a different standard than you live by? »

On the work of code talkers in World War II: “They helped defeat Germany, and the Germans were killing a lot of minorities, maybe all of them. The Japanese did the same too. They killed them all. If the Axis powers had won the war, there would have been no minorities. I wouldn’t be sitting here because they killed us all.

On the historical significance of code talkers: “Thus, the greatest Lakota warriors belong to the greatest generation. They are Lakota code speakers. There is a record, a record of the United States winning the war.

Ex-commissioner among those worried about feedlots

Read more about South Dakota’s significance: “There’s a coder exhibit at the (state) Cultural Heritage Museum. It’s something. People need to know. You hear individually, but as a group they’ve done a lot and they’ve been true to their word.

On “Thou Shalt Not Kill” as one of the Ten Commandments and his time in Vietnam: “And here I am, in a place where there are killings every day. People are dying. He didn’t say, ‘You will not kill except in a war.’ It was not said. He was just saying, ‘You won’t kill.’ You have to overcome all of this and deal with it yourself, as you go through it, from your first kill to when you come out. You become hardened, because your friends and people in your business are getting hurt and killed.

About the mistranslation of South Dakota’s most populous county: “They call it Minnehaha, and they said, ‘Oh, ha-ha, that means laughing water.’ Well, there’s a diacritical mark that goes above the h and it’s pronounced “hah-hah” so it’s “Minne-hah-hah”. What do you think that means? Waterfall. Not complicated. So, is there a waterfall around Sioux Falls?”

On the Fighting Hawks name change and the true meaning of the French and Chippewa word ‘Sioux’: “It was the University of North Dakota. They were fighting, doing something to keep their Fighting Sioux name. So I wrote an article that said, well, if they really want to keep the term Fighting Sioux, they should keep the correct translation and call themselves Fighting Little Snakes.

The Life and Death of the Spanish Language in the Philippines