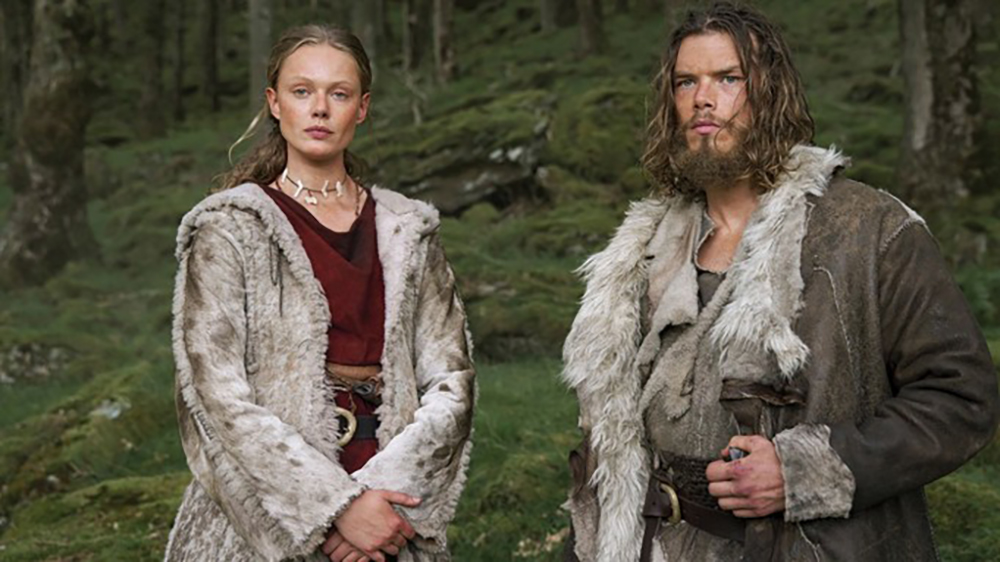 Frida Gustavsson walked for Valentino, Chanel, Lanvin, Carolina Herrera, Fendi, Oscar de la Renta, Versace, Christian Dior and even donned a pair of wings for Victoria’s Secret. However, her most revealing walk in recent years, she said Varietywas a runestone walk she did with her father in her Swedish hometown to do extracurricular research for her starring role as Freydís Eiríksdóttir in “Vikings: Valhalla.”

“I went for a runestone walk with my dad, who is a history buff. The Vikings left all these wonderful runestones behind – they had erected stones with letters carved in the Elder Futhark alphabet, which is the 1000 year old Swedish alphabet,” she explained to Variety. “These are little remnants of a bygone era, but they’re still scattered all over the area where I live and tell little messages about what it was like to live there and come back after traveling to England and to return home with gold.”

As soon as Gustavsson landed the role of Freydís, she knew she had to do good to both the fans and her Scandinavian roots and learn all she could about Viking women. She opened her old textbooks, she went to all the museums, but even the runes she saw with her father didn’t tell her much – or anything at all – about the type of woman she was. would need to represent on screen. That’s when she knew the stakes for accuracy were high.

Jeb Stuart’s ‘Vikings: Valhalla’, a 100-year leap from its predecessor ‘Vikings’ created by Michael Hirst for the History Channel, dropped its eight episodes on Netflix on February 25. The results – four consecutive weeks on Netflix’s Top 10 for English-language TV and two consecutive weeks in Nielsen’s Top 10 SVOD rankings in the original and regular programming categories – proved that loyal fans were ready to put their Viksø headphones back on. and delve into the gritty lore of the Old North.

For Gustavsson, the attention to “Vikings: Valhalla” has been “incredibly overwhelming” and taken out of his wildest imagination. “The most special thing was seeing young women around the world watching the show and sending me little notes responding to my character. It meant the world to me,” she said. The actor spoke with Variety about the rigorous research and stunt study she had to do to pull off the role, rediscovering her Scandinavian heritage in an entirely new light and way, and the cute and idyllic camping trips she took with the cast in distant Ireland between takes.

Many people recognize your name in Victoria’s Secret and other modeling campaigns. You made an interesting pivot from the track to the historical biopic space. Tell me a bit about the decision to pursue this role and how the casting worked out.

I worked as a model. It was never really something I planned or set out to do. My goal since I was little was to work with a film or theater company. I was spotted somewhat by accident and thrown into the whirlwind of the fashion industry, but I always knew that wasn’t my final destination. I always wanted to play well. I went back to Sweden in 2015-2016 and went to drama school in my own language. The casting opened up for me after playing a small part in “The Witcher”, where I got to play alongside the wonderful Henry Cavill. In this sense, I was already a bit inside “The Netflix Universe”, when I heard about this project. I was a big fan of “Vikings” because I’m Scandinavian, so I’m quite inclined to like it and be drawn to the pagan world. The prospect of delving into my Scandinavian history and culture in this way and further into this genre really tickled me. The idea of ​​being a part of something that was so hugely popular is a double-edged sword because I wanted to live up to the “Vikings” franchise and make fans of the original show incredibly happy, but at the same time , I wanted to “leave my own mark in the sand”, as we say in Sweden.

The casting process was quite intense and included a lot of self-tapes. I was flown to Ireland to the studios where we primarily film the show and it was inspiring to be taken down the halls and see bits of costume and set pieces from the original show. I remember sitting there with Sam (Corlett) and Leo (Suter), and looking at each other like, “Wow, this could potentially change the course of all of our lives.” Then we all ended up being chosen together.

There is a lot of action in this show. Not only did you have to memorize lines, but you probably also had to memorize moves. How was it?

I’m very thankful that as an actor and as a person in general, I’m very physical and active. I like the aspect of working with my body and knowing that Freydis was going to be a very accomplished warrior. It made me tick. I had the opportunity to train for a few months with a personal trainer before arriving in Ireland, where we then participated in a fairly extensive bootcamp with the stunt team. We soon realized that the three of us (me, Leo and Sam) could handle our own stunts. We started with knives, then with axes and spears, then we built the choreography as the sequences got bigger, longer and more complex. It was rigorous but I was glad I had the confidence of Richard Ryan and the other wonderful choreographers on our stunt team. I’ve done everything but a stunt on the show.

I know you’re Scandinavian, but even I, as an American, can admit that I don’t know every moment of our history. What story was new to you, based on your research for the show? What marked your character during the reading?

I opened my own textbooks very early in the process. I realized that at the forefront of our history, what I learned was mostly about all these men – Olaf II Haraldsson, Leif Erickson, etc. There was all this empty space where women should be. It took me a bit of research to find out more about Viking women. Finally, a book came to me from heaven called “Women in the Viking Age” by Judith Jesch. And then all the women came out of the shadows and demanded a place in Viking history. In the book, she chronicles the life of a Viking woman from cradle to grave in incredible detail. All his research focuses on literature, archaeology, history and language.

The moment the show takes place is at the breaking point of paganism, where Christianity comes in. It brutally stifles the pagan way of life and the pagan way of life, and you can start to see the differences in the roles of the women in Christian society versus pagan society. I wanted to approach it like a sociologist or an anthropologist, and really understand the world of Freydís and what it was like to be a woman at the time, and the class perspective of femininity. Of course, it helps that for Freydís, his father was a leader who allowed him to continue this journey of revenge. She had a certain status at the time.

What was your favorite aspect of your character’s arc in Season 1? How do you think Freydís evolved?

When you meet Freydís, she has almost become radicalized in her beliefs. Everything for her is black or white. It’s pagan or Christian, good or bad, right or wrong. She is very closed in her way of thinking and comes from an isolated place with little human interaction. She is also the survivor of a horrific rape. She channeled every fiber of her being into revenge, and she didn’t plan anything for herself beyond accomplishing that. She approaches him almost like a kamikaze pilot. In episode 1, she already did. I found it incredibly interesting as an actor to explore what happens when all of these things come to a head and she has to ask herself, “Now what?” She is pushed on a spiritual and emotionally complex journey where she is forced to come out of her shell and accept more love – until she is betrayed by Harald.

There are a bunch of scenes where you have to pray or recite lines in Old Norse. How did you make sure your inflection was correct and were there any dialect coaches helping you out? Did it help you to be fluent in Swedish?

Old Norse is a language that resonates with some dialects of my own language. There are still Swedes today who speak a version of Old Norse, so some sounds are quite familiar to me. I think languages ​​are fascinating and they are another kind of armor for our characters. Old Norse took me on a road to Freydís and her spirituality and her way of communicating not only with herself but with her belief system. We had two wonderful dialect coaches who worked closely with us and with ancient language experts. They broke them down phonetically into Swedish, because the bridge is shorter between Swedish and Old Norse than going through the roots of English, and it made a lot more sense in my head.

You have already shot season 2. How does it feel to film two seasons already for this huge production? What did you not know before that you learned on the job?

Working on a production of this magnitude has been wonderful and at the same time incredibly terrifying. I think after spending the last five or six years working in Sweden, it was a shocking experience to get on set with Netflix. It makes things so much easier as an actor, but at the same time, you feel so responsible to every single person on the crew who put their love and heart into working and building something so magnificent. Something new for me was the collaborative experience of this show. It cemented the idea on set that this workplace was where we worked together. Jeb Stuart, our showrunner, deserves a big thank you for that. He’s incredibly smart and empathetic, and he’s been generous with his time and creativity. He really invited me, Sam and Leo to be creative partners in this work and we were invited to bring our thoughts and concerns to the table regarding our characters and the script. I felt like a real creative partner. Hopefully it’s something I can bring to other productions in the future.

When you weren’t filming, what were you doing?

Ireland was mainly in lockdown because of the coronavirus. We were more or less completely cut off from the real world, especially for season 1. Me, Sam, Leo and Jóhannes lived together in a small fishing village very close to the set and cut off from the outside. We all got to know each other very well. We cooked a lot of food and hung out at each other’s house and became family to each other. We would help each other to debrief and chat and when time allowed we would go for a swim and try to be there for each other and create a sense of normalcy in this life changing project for all of us. We played a lot of tennis together and went on short camping trips. We loved exploring the mountains of Ireland and the beaches, so we usually took a car or two and stuffed it with stuff and drove to a remote location for a BBQ. We all had a special and unique time together.

This interview has been condensed for length and clarity.