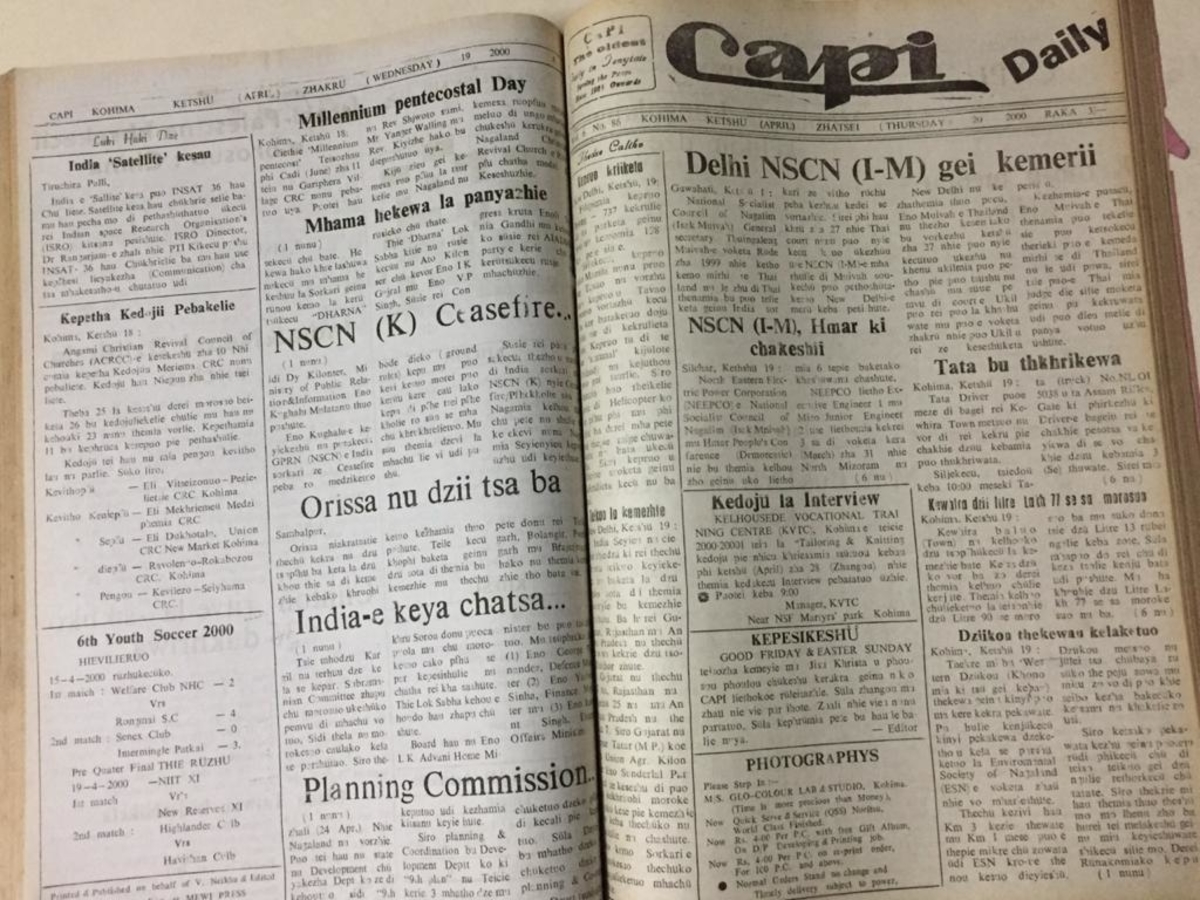 UNESCO says the Tenyidian language is in danger. What should we do next?

What is Tenyidia, and who uses the tongue?

According to Ura Academy (UA), a literary society established in 1971, there are 10 tribes â€” Angami, Chakhesang, Pochury, Zeliangrong, Rengma, Mao, Maram, Poumai, Thangal and Impui, which form a community called Tenyimia. Tenyimia is a group of Naga tribes who have common ancestors and have the greatest speakers of a standard language called the Tenyidie language.

The Academy, which works for the preservation and perpetuation of the Tenyimia culture, in its book “Ura Academy Dze” (which roughly translates to the story of Ura Academy), said Christian missionary CD King and his wife, who established a mission school in Kohima. in 1882, introduced Tenyidia as a subject in 1884.

Then the Rev. SW Rivenburg and his wife Hattie, who came to Kohima in 1887, took over the incomplete literary works left by CD King and literalized the Angami dialect or the Tenyidie language. Rivenburg is credited with translating three chapters of the Bible.

According to Riku Khutso’s research, the standardization of Tenyidia by missionaries was an important factor in bringing the literary language to different parts of the areas inhabited by Tenyimia. With the rapid spread of Christianity, Tenyidia became the common medium of communication, as the Bible and hymns were printed in Tenyidia.

The Angami vernacular, along with Kheza, Rengma, Chokri, Pochury, Sumi, Lotha, Yimchunger (now known as Yimkhiung), Khiamniungan, Ao, Sangtam, Phom, Konyak and Chang has been listed by UNESCO as vulnerable among endangered languages.

Although Tenyidia is the native language, most Tenyimia tribes have their own dialects – where speakers of different dialects within the same language have very little or no similarity to Tenyidia.

â€œIf we look at the population growth, the number of Tenyidie speakers is increasing. But there is a geographic threat because the number of speakers may actually decrease â€, Mhalezolie Kire, editor and publisher of Capi, a vernacular daily Tenyidie, tells EstMojo. Capi is the oldest surviving vernacular daily in Nagaland, with a wide circulation of the newspaper in Kohima, Dimapur and Phek.

He cited how the older generation of the Pochury tribe living along the Myanmar border still speak Tenyidia, but the Pochury dialect is spoken mainly among the younger generation, especially among those who live in the Meluri subdivision of the Phek district. . The same is visible among the other Tenyimia tribes in Kohima and Dimapur districts.

After the advent of Christianity and the introduction of modern education, English became an ambitious language. In the absence of a standard common language for the Nagas, the international language has undoubtedly become the official language of the state and remains the primary medium of instruction.

â€œWe never consider one language to be superior to another, regardless of the number of speakers. The language is expansive, â€says Professor D Kuolie, Head of Department (HoD) of Linguistics at Nagaland University.

However, these languages â€‹â€‹are taught in some public and private schools in the state, unlike English, which is compulsory.

Although the Naga languages â€‹â€‹are “safe” for the time being, he said there is a need to develop native languages â€‹â€‹for full development. He pointed out how the lack of writing in the Naga language in the humanities, philosophy, science and technology endangers languages. He said that there is a need to develop an indigenous literature that is not limited to a particular field of study.

The current scenario from the Tenyidian language

Capi editor and publisher Kire said that in an attempt to preserve Tenyidia today, there has to be a balance between the languages. â€œDespite the standardization of the Tenyidian language, we need to balance the language with the words used daily. For example, we use both the English words and tenyidia on newspaper printouts to show the months of the year and the days of the week, keeping our young readers in mind, â€Kire said.

Professor Kuolie, who is the author of 17 books in Tenyidia, said: â€œOur Naga intellectuals or the educated class have become illiterate in their mother tongue. It is not their fault. It is the fault of the situation and the progress of society.

Since all of the Nagas languages â€‹â€‹are unscheduled languages, he said the influence of Christianity and modern education has brought about social change, directly affecting mother tongues. The predominantly Christian state’s approach to developing a secular language, he said, is â€œtotally voidâ€ because there is no concrete and constructive approach to enrich indigenous literature.

With the advancement and proficiency of the English language, he said that the knowledge gained through English can be used as a raw material to develop the respective languages â€‹â€‹and revive the indigenous languages.

According to Professor Kuolie, Nagamese, the â€œlanguage of the streetsâ€, is a natural threat to the Naga languages. Nagamese is said to be a combination of Assamese, Hindi, and Bengali. â€œAlthough Nagamese is not of Naga origin, it has become a viable means of communication and we cannot avoid it. It is a direct threat to the Naga languages â€‹â€‹and therefore people must realize that their languages â€‹â€‹will be forgotten if the language of the streets is often used, â€he said.

Stating that languages â€‹â€‹should never be legislated, Kuolie, who is also the general secretary of Ura Academy, said the language should be used by speakers as a natural evolution. He said that since the AU is trying to save the Tenyidi language, it pays no attention to the development of Nagamese.

â€œNagamese kills our language,â€ said VizonyÃ¼ Liezietsu, joint director of Rtd Agriculture, at Tenyidie KephrÃ¼nuoko Krotho (TKK), an organization made up of students specializing in Tenyidie, at a recent seminar in Kohima. He said citizens of the state should instead learn Hindi, the national language, instead of speaking Nagamese.

Why the preservation of Tenyidia is important

“The value of the many degrees one gets in life is diminished without knowing one’s language,” Liezietsu said. He insisted on the need to preserve the language, as some words in the Tenyidian language are disappearing. He said that if traditional practices are no longer followed by people, it contributes to the loss of languages.

As for Kire, he is of the opinion that if the Tenyidian language is used, spoken and preserved by the present generation, there should be no concern of its extinction in the coming decades.

As the former head of the Angami Students’ Union (ASU), he recounted how in 1995 the student body made it compulsory for schools under his jurisdiction to introduce Tenyidia as a language of study. in schools. “It was for the first time that such a decision was taken, because we felt the need to preserve the language,” he said.

At present, there are only a few schools and colleges that offer Tenyidia as an optional subject. â€œLanguage cannot be imposed. So now it has become very important for the younger generation to understand their mother tongue and their second language, â€he added.

It may be safe to note that young people are currently multilingual as they are exposed to English through modern education, Nagamese, the default street language and the local dialect that is often spoken at home. Although they are multilingual, most people can be inclined to the English language, the language that is taught at a very tender age.

Kire said the younger generation should be encouraged to learn Tenyidie.

â€œNative speakers must accept and respect their language. They should try to speak and write even if it can be up to par, â€he expressed with concern.

VilhoukhoÃ¼ Solo, an elder from the Angami tribe, said the current generation can be the bridge to connect the older generation and the future generation. â€œPreserving the language requires a collective effort. Strengthening and transmitting our language is our responsibility, â€she said.

Dr KhrÃ¼volÃ¼ Keyho, the first scholar to obtain a PhD in Tenyidia, said that at present the Tenyidie language is popular among the Naga languages â€‹â€‹because there is a certain set of rules / standards used to maintain the language. .

The speaker said that despite the introduction of the Tenyidian language in schools, colleges and at university level, the language is not duly respected even by those who teach the language. To preserve and protect the language, she insisted on the need to use and speak the language at joint gatherings.