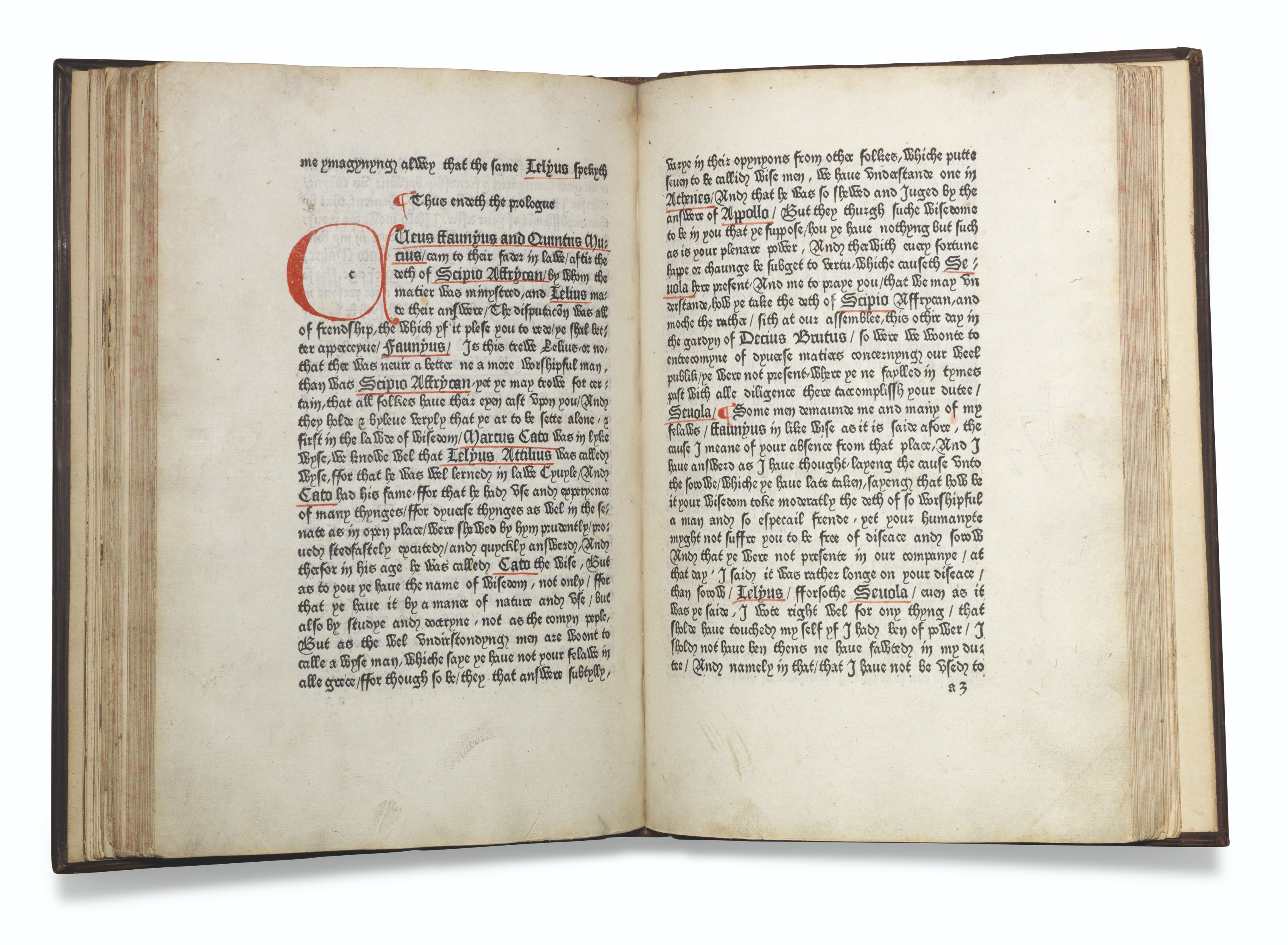 TOUR LANDRY, Geoffroy de la (fl. 1346-c.1406). The knight of the tower, translated into English by William Caxton. Westminster: [William Caxton], January 31, 1484. 7 leaves only (out of 106).
An unregistered copy of the Caxton Cicero. First edition in English of all works; the Ciceronian texts are the first works of classical antiquity printed in England and the first in English. One of the 5 copies remaining in private hands, all imperfect. Preserved with this is a fragment of 7 leaves from a Caxton‘the rarest prints, The knight of the tower, a guide to the education of young noblewomen, which only exists in 6 copies, all institutional.

William Caxton, England’s first printer, established his printing press within the grounds of Westminster Abbey around 1475. His publishing program was characterized by works in English, mainly literary, intended for the upper echelons of society: rich merchants (like him), gentry, nobility and royalty. Caxton’s prologues and epilogues in Cicero show that he is no exception. It is nominally dedicated to King Edward IV, and Caxton praises Sir John Fastolf, Knight (“a secondary original of Shakespeare’s Fat Knight” – Painter, p.112) as patron of the English translation of Cicero Of old age and John Tiptoft, Earl of Worcester, as translator of the other two works. By commemorating the Earl of Worcester (beheaded in 1470) in glowing terms, Caxton was currying favor with the Queen’s family, the Woodvilles, and his brother Anthony Woodville, Earl Rivers, Caxton’s most active patron in his first years.

Regardless of Caxton’s business and political reasons for publishing The Cicero, there remains a milestone in English humanism. The two texts by Cicero are the first works of Classical Antiquity to be printed in English and John Tiptoft, translator of On friendship, was a leading English humanist and scholar; the third work in the volume is by the Italian Renaissance humanist, Giovane Buonaccorso da Montemagno, also translated by Tiptoft. The three works all emphasize virtue and wise counsel; Montemagno pleads for the nobility to reside in its own character and its own actions. Stephen Scrope is now recognized as the translator of Of old age, after a French paraphrase by Laurent du Premierfait, and with revisions by William Worcester.

Although pointed out to some scholars by 4th Baron Kenyon in the 1950s, the Kenyon copy has escaped public attention in any census or bibliography (De Ricci, Duff, ISTC). It joined only four other copies – all imperfect – remained in private hands: the Wentworth copy (De Ricci 31.23), sold in these rooms in 1998 (the last copy on the market); the Kimberley-Boies Penrose copy (De Ricci 31.24); the Roxburghe-Devonshire copy (De Ricci 31.20); and the Mandl-Stiftung copy. The Gordan copy (31.41) consists of two fragments. It is a large copy, 30 to 40 mm larger than those in the British Library.

The knight of the tower was written by the 14th century knight, Geoffroy de la Tour Landry, as a guide for his noble daughters, educating them in moral and social conduct, or, as Caxton explains in his prologue to his own translation, so that ‘yong gentyl wyme in particular can learn to marry virtuously, both in their vyrgynyte and in their marriage and wedowhede’. It enjoyed a wide distribution in Europe, but in England already from the 16th century, it was considered too risky and instructive in “vices, subtlety and craftsmanship”, that is to say exactly anti-feminine behavior. against which he warned. Dibdin (Typographic antiques) cited his “unforgivable indelicacy” and “grossly offensive passages”. An English translation existed in manuscript before that of Caxton but it is an independent translation based on a manuscript closely related to Brussels, Royal Library, MS 9308, associated with the Dukes of Burgundy. This is one of the rarest Caxton prints. No copy has been auctioned for more than a century and no other copy or fragment is known in private hands. Of the six institutional copies recorded, 3 are imperfect. Correspondence with Marguerite Offord and Seymour de Ricci and other loosely inserted notes.