When I saw the account @Siyabangena22 Floating on my Instagram feed, advertised as the unofficial Investec Cape Town Art Fair afterparty for 2022, I knew I had to be there. The same way you had to be there in 2008 when DJ Vetkuk vs Mahoota featuring Thebe released his hit song, also titled Siyabangena.

South African dance music crystallized in various sound experiences from Pitori to eThekweni, with Pitori DiBarcadi electrifying the thud of electronic dance music all over the world, and Durban evolve the sound of the kwaito. It certainly can’t be a coincidence, I thought.

Siyabangena22 is a confluent intertextual pop-cultural and artistic moment. It is a moment that reads the music and sound cultures of black queer parties as treasured repertoires and social documents of our ontology beyond the eye-centered gaze of the visual arts. Siyabangena22 was and is an urgent call to the Cape Town art world, and perhaps the contemporary art market in general, to shift their meanings and engage other practices: the sounds of loud gay life black. A relevant call when we consider the current contestations of the black figures of the portrait in the circles of contemporary art.

Writer and curator Nkgopoleng Moloi laments how “black portraiture has been (and continues to be) ruthlessly commodified in its display and consumption”. At the same time, scholar and art critic Ashraf Jamal boldly declares that “today there is no greater currency in the world of contemporary art than black skin”. Meanwhile, the art historian Darby English suggests that the flow of black figuration smooths out the complexity of black life. Worrying that such a boom will prevent us from using our time and resources on parts we can neither imagine nor sell: mysteries, fractions, monsters.

All the more, Thebe Phetogo made appropriate provocations as an artist who was part of the SOLO section of the Investec Cape Town Art Fair 2022 with his speculations on the origin of the concept of “black body” in physics and an audience participatory series where the viewers were able to vote for their favorite origin story. While Phetogo’s series of fluorescent green zombie-like figurative paintings were playful and engaging, they also reflected the ecosystem of art fairs as the site of current art market speculation on black bodies, especially in painting. DJ, iSpeleti on the decks alongside his mentor, Shakes Mbolekwana. (Photo by Earl Abrahams)

This is the controversial terrain that Siyabagena22 enters, after all the gossip and glitz and galerina leaps of the program for the second Saturday of the Investec Cape Town Art Fair 2022. Siyabagena22 – “the unofficial after-party of the art fair” – starts at 9:00 p.m. at The Ramp, 15 Carlisle Street, Paarden Eiland, Cape Town. It immediately feels confrontational, addressing the long-standing history of Cape Town Art Fair after-parties as enterprises of socio-cultural exclusion.

The party calls for a different sensory engagement that goes beyond a passive gaze at black figures in art as symbols of inclusion. Just like Tina M. Campt’s preposition and intervention for a new model of engagement of black subjects in photography in her book Listen to pictures (2016), Siyabangena22 calls on the art world to engage the sensory register of ‘listening’, rather than just ‘watching’, images of black subjects. As Campt writes, it is “a conscious decision to question the equation of seeing with knowing”.

So I have to ask then, thinking of Marcus Boon’s article about the nation under a groove: what does it mean to understand our own being in the world through black popular music and sound phenomena? Siyabangena22 provides an answer in its slogan which simply says “less talk more democracy at the disco!” This isn’t just another art fair afterparty.

Siyabangena22 is an afterparty that aptly considers the relationship between political discourse and collective organization in South Africa as it was shaped in black township shebeens during apartheid. It examines how the existence of prom culture was founded underground by the LGBTQ+ African American and Latino communities – “Houses” – in New York in the late 19th century, resisting queerphobia. These disco sites serve as robust incubators for radical discourse on human issues, where sound reading, performance and collective organization are grammars of certain philosophical positions of being. Makeup artist to the stars, Khaya Mhleli walks in the supermodel category of the ball. (Photo by Count Abrahams) 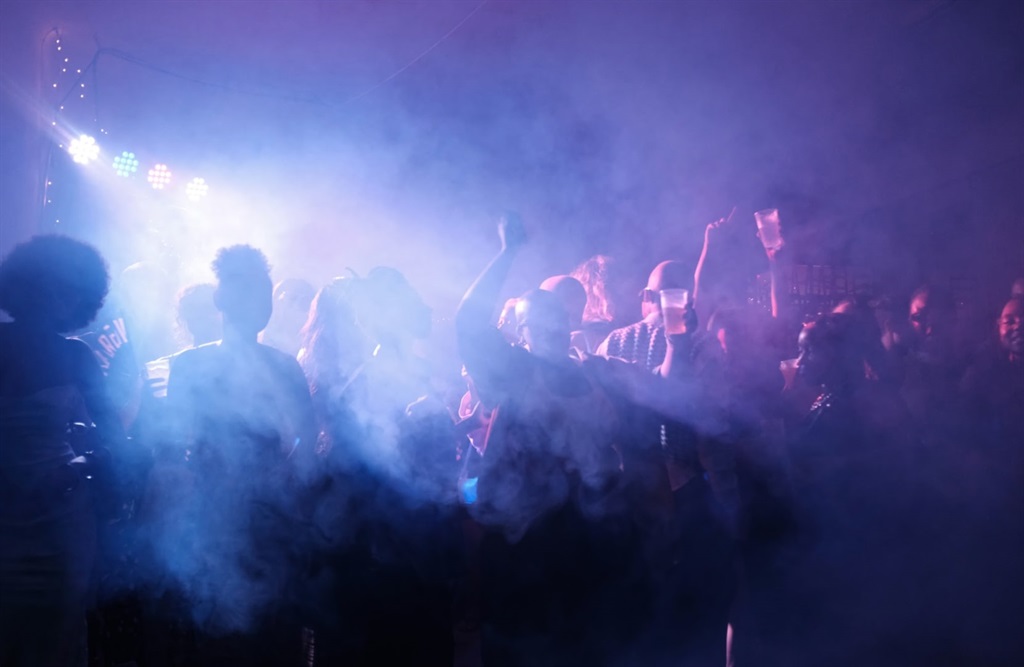 However, Siyabangena22 is also a refusal. Likewise, it challenges us to go beyond reading the sounds of popular black and queer music and spaces as mere sites of creative resistance. Or as simple Blackness reading sites in tandem with a streak of a post-apartheid zeitgeist: often academic discursive scholarship that can have a restrictive and authoritarian analytical-interpretive gaze. Siyabangena22 commands us to recognize the limits of such language – the limits of academic research on black queer music and sonic sensibilities.

The afterparty calls us to think less discursively and more with the phonic materiality of dance music four on the ground and in a context like (South) Africa, through the call and response of democratic participation in pervasive social gatherings, such as ancestral rituals, political events, funerals and weddings. Siyabangena22 urges us to tap into the intersection of popular black sound phenomena and life as it transcends the ideological constraints of epistemology’s obsession with interpreting “the Other”. He calls the art world – borrowed from Amber Jamilla Musser’s book Sensual Excess: Queer Femininity and Brunette Jouissance (2018) – thinking with the flesh and the sensual as a starting point for making new acquaintances. Berlin Williams and Chesire V were honored for winning the top model category at the ball by Siyabangena! founder Siwa Mgoboza. (Photo by Earl Abrahams)

The ubiquitous hypervisibility of the black figure in contemporary art is not, and should not, be seen as easy entry points into black and queer life because the registers of engaging blackness remain multiple.

Siyabangena22 responds to the consumerist art world by drawing the sound and its dramatic forms or repertoires of disco as a way of offering other sensory engagements that the black and queer figure holds. Siyabangena22 is an insurrection: a shameless infiltration of a demanding and claiming space in Cape Town’s artistic bubble of whimsical inclusion. Siyabagena22 is Bonang Mathebe’s Tjovitjo whistle meme, where she enthusiastically declares in Setswana and English, “re tsene! We’re inside!”

Educational controversies have their own history