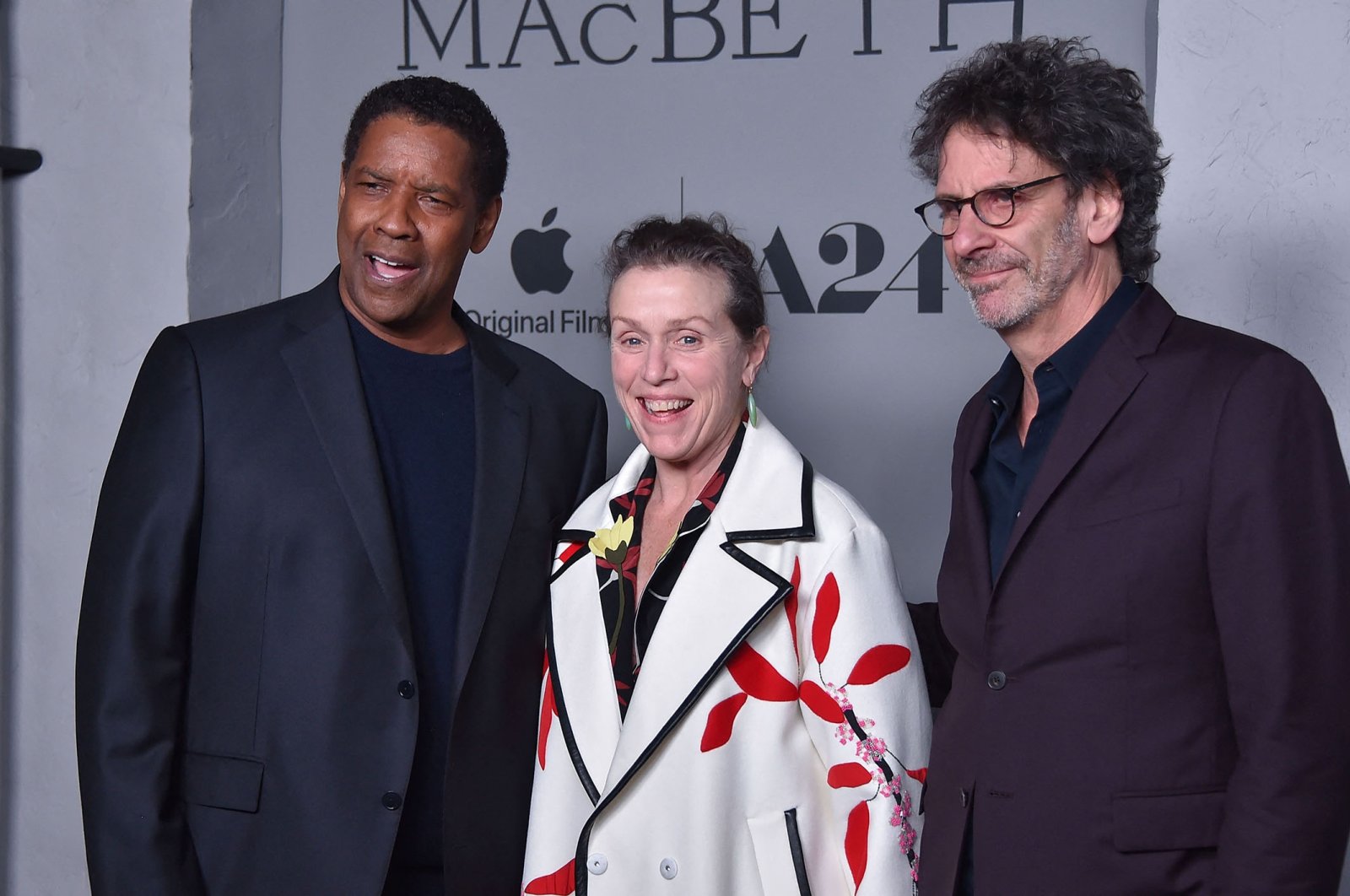 At 66, Denzel Washington as a veteran star, is perfectly suited to the role of wearing the highlight of Joel Coen’s ‘The Tragedy of Macbeth’ – now streaming on Apple TV+ – alongside his co-star, and equally veteran , Frances McDormand as elder- than usual Macbeth and Lady Macbeth.

But lurking throughout the film is a catchy character, as sinister as it is striking, who seems to be fighting on both sides of the battle between good and evil. The mystery of his identity may cause some viewers to feel the need to brush up on their Shakespeare. A good starting point would be Roman Polanski’s 1971 film “Macbeth”.

Ross isn’t generally considered one of the plum supporting roles in Shakespeare’s play, at least not compared to Banquo or Macduff. But Coen invests the character with an evil purpose, lending him a hand in the machinations that only escalate after Macbeth seizes the throne in murderous fashion.

Dressed elegantly in black, his goatee walking a fine line between sexy and sociopathic, Alex Hassell’s Ross moves from the murky periphery of the new film to the center of the action. He’s like a ghost version of “Macbeth,” a political operator shrouded in ambiguity waiting for the chance to pounce.

Coen follows Polanski’s lead in casting Ross as the third murderer, whose identity is one of the enigmas of Shakespeare’s tragedy. Macbeth tasks two desperate men with killing Banquo, but a third mysteriously appears just as he does the job. He says he was sent by Macbeth but doesn’t reveal anything else.

Significantly, this unnamed character knows the grounds of the castle well and can easily identify Banquo when he appears. Speculation has centered on Ross, Lennox – an other than – and even Macbeth himself in disguise. If I was in the cast, I’d ask the actor playing the devilishly named Seyton, Macbeth’s loyal servant who appears briefly in the final act, to take on the role.

Textually, it is difficult to argue for Ross, Lennox or Macbeth, as all three are present at the banquet where Macbeth receives the news that Banquo has been killed but not his son, Fleance who managed to escape. The first murderer who delivers this mixed tale in Shakespeare’s play has Banquo’s blood still freshly splattered on his face. Obviously, he didn’t have time to wipe his brow, let alone for one of the assassins to dress for a state dinner.

But Coen’s cinematic instincts guide him in intensifying the plot in a meticulously art-driven black-and-white film that is deeply indebted to other cinematic versions of Shakespeare’s tragedy. Indeed, the conversation Coen has with other screen adaptations of “Macbeth” – including Orson Welles’ jerky 1948 spectacular, Akira Kurosawa’s magnificent 1957 “Throne of Blood” and the Polanski’s sexy slaughterhouse – is more satisfying than her engagement with the piece itself.

It’s not a slam. As a reading of the play, Coen’s film, while circumscribed, is full of provocative ideas. By casting Macbeths with actors in their sixties, he makes the story of the childless couple less about ambition and more about legacy. Macbeth laments that the crown he wickedly won is “unfruitful”. Death is palpable in Washington’s weary gaze. McDormand’s Lady Macbeth pushes her husband to a final sigh of greatness as much to stave off his own fears of mortality as his own.

War, the crucial context from which evil naturally emerges in the play, is neglected. Polanski’s film, by comparison, shows these Scots as debauched with battlefield blood. The strange sisters, embodied in the hauntingly smoky performance art of Kathryn Hunter, seem as much a fact of the natural world as the crows circling the bronze sky. Indeed, witches transform into birds, a feat made more plausible by Hunter’s contortionist skills.

Washington’s Macbeth is obviously susceptible to temptation. He ruminates on the prophecy that he will one day be king, the prospect awakening what is clearly a deep longing. In Shakespeare’s play, the occult is an expression of what is already inherent in the psychology of the protagonist. But here, darkness falls on him. It should be noted that when he wishes to consult the witches after he is king, they come directly to him. These nasty crows are never out of sight for long.

These movements of interpretation did not result for me in a revealing comprehension of “Macbeth”. But that may be because the story that interests Coen most in the play has to do with his cinematic history.

Shakespeare on screen is an odd hybrid and a director has to declare whether his allegiance is to film or theatre. Laurence Olivier’s Oscar-winning “Hamlet,” released the same year as Welles’ “Macbeth,” attempts to make full use of the agility of the camera in its Freudian reading of the tragedy. But a classic British stage play idea bogs the film down in awkward limbo.

Welles’ “Macbeth,” while historically significant for its bold authorship, is also held back by the theatrical fustian and bombast. The cast’s bulky brogues and wicked flourishes almost upend the inner gravity of Welles’ star turn in a film that takes many of its horror-movie visual and sonic cues adventurously.

The crucial question that must be answered when adapting Shakespeare for the screen is how a language brimming with music and metaphor can be integrated into a more visually oriented medium. To answer the question of which to privilege, word or image, a director is forced to choose between contrasting artistic grammars.

Peter Brook, whose 1971 film version of “King Lear” is a seminal experiment in Shakespearean cinema, expressed this point more accurately when he observed that “the problem in filming Shakespeare is finding ways to change speed, style and convention as lightly and skillfully on the screen as in the mental process reflected by Elizabethan blank verse on the screen of the mind.”

Welles’ “Chimes at Midnight” will always be a personal favourite, but filmmakers who don’t work in English have the advantage of not being burdened with the care of Shakespeare’s verses. “Hamlet” (1964) and “King Lear” (1970) by Soviet theater and film director Grigory Kozintsev represent triumphs of Shakespearean cinema. Akira Kurosawa’s ‘Throne of Blood’, his seductive 1957 film based in part on ‘Macbeth’, and ‘Ran’, his majestic 1985 epic based on ‘King Lear’, have the distinction of being masterpieces. work of autonomous cinema.

Coen, in collaboration with production designer Stefan Dechant and cinematographer Bruno Delbonnel, is inspired by this story. In agreement with Welles, Coen takes a non-realistic approach to the setting. The space of this new “Macbeth” is an aesthetic space, neither subject to the laws of everyday life nor antithetical to them.

Clean geometric lines and artful shading predominate. The interplay of light and dark doesn’t quite reach the painterly magnificence of what Kurosawa creates in “Throne of Blood,” but the spatial strategy has a Pythagorean elegance.

Unlike Welles, Coen avoids the impression that the action takes place on a supposed stage. It’s a movie from start to finish. The tone is intimate, almost familiar, but Coen isn’t shy when it comes to big speeches. It does not rely on voice-overs or film them obliquely à la Polanski, which delivers poetry to us in passing. Coen knows that’s the main reason we’re here.

Washington is no stranger to iambic pentameter, but his Macbeth is more piercing in its sighs than in its words. The monotony he adopts to capture the spiritual immolation of his character is dull to listen to. McDormand, who played Lady Macbeth in a spotty production at Berkeley Rep., is only effective when her feet are firmly planted in realism.

Unwavering in Coen’s conversational tone for them, Washington and McDormand are picky about making their lines look natural. Their psychology rings true but Shakespeare’s music is muted.

Thankfully, the top-notch supporting cast is more melodious. But the jazz in Coen’s “Macbeth” comes mostly from the staging. This is where the film is most free. I was more moved by the sight of Lady Macbeth’s body at the bottom of a dizzying staircase than by McDormand’s groaning rendition of the sleepwalking scene or by Washington’s exhausted handling of the soliloquy “Tomorrow, and tomorrow, and Tomorrow” from Macbeth.

A theatrical superstition holds that it is bad luck to utter the word “Macbeth” inside a theater, but tragedy can be cursed in another way: it is extremely difficult to prevent the sensational theatrics of the play to overwhelm the delicate dramatic path of a protagonist who goes from being a glamorous military hero to that of a pathological butcher.

By the end of “Macbeth,” the audience is often too numb to feel anything. But I felt a sharp twinge of pathos when, in the final moments of the film, the crown for which Macbeth lost his soul is hurled violently into the sky by Macduff’s sword – an excellent Corey Hawkins.

Coen captures the myopia of vaulting ambition in a single image. But the film does not end there. Ross, who always appears when news comes, is already speeding up the next chapter with his malicious program. It’s not for nothing that he has his own scene with the supernaturally gifted hunter. I won’t spoil the ending, but Shakespeare wouldn’t have risked offending his royal patron, King James I, with this twist, even though he couldn’t help but secretly admire the enterprising audacity.

The sequel to this story may inspire Ethan to join his brother Joel in a dark tale of immorality by the Coen brothers. Murder and mayhem without the blank verse. But in the meantime, a superb “Macbeth” has been added to the tradition.