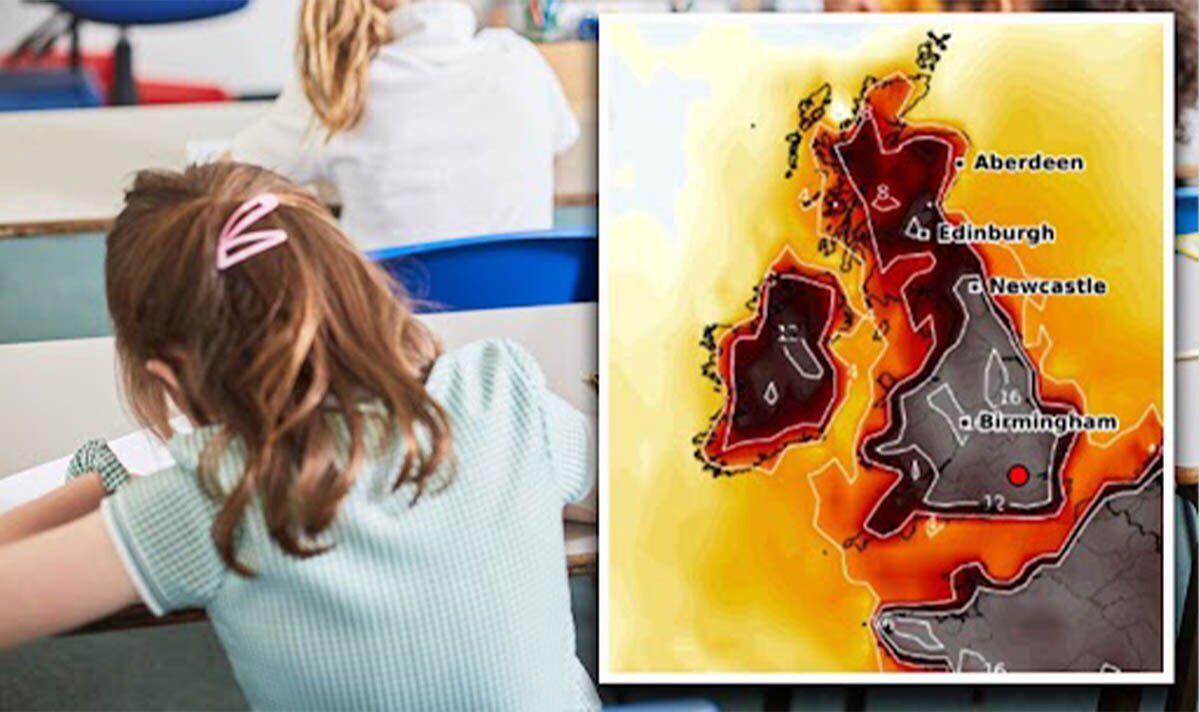 Schools closed due to hot weather: was yours on the list of the first red warning issued?

Orange extreme heat warnings were issued across most of England and Wales between Sunday July 17 and Tuesday July 19, with rare red heat warnings issued for parts of the country on Monday and Tuesday. Scorching temperatures between 30C and 40C are expected in parts of the country, forcing schools to take extra measures to keep staff and students safe. Several schools in the UK have already revealed plans to close in response to the Met Office’s “unusually” warm weather forecast, with more expected to follow as the heatwave continues. Here is the latest list of schools that will close early next week.

Winston Churchill School in Woking, Surrey, has made the decision to keep all staff and pupils at home on Monday and Tuesday next week.

In a letter to parents and guardians, the headmaster said: ‘The forecast for the weekend and then Monday and Tuesday of next week will be beyond what we can handle at school and will jeopardize the health and well-being of students; especially on the way home.”

School hours are due to resume as normal on Wednesday July 20, although plans may be revised if the weather forecast “changes drastically”.

Three primary schools and one secondary school in Herefordshire have already announced plans to send pupils home earlier than usual on Monday and Tuesday.

Parents have been told pupils ‘will not be allowed to play outside’ in the extreme heat, with a temporary ban on PE lessons also in place during the hottest times of the day.

Marlbrook, Little Dewchurch and St Martin’s Primary School are among four schools in the area to announce their plans and will give parents the option to choose whether their children enter at all on Monday July 18.

READ MORE: How to Treat Yourself to a Five-Minute Holiday Facelift – video

The British capital will also see schools close early on the first few days of the week.

Clapton Girls’ Academy will close early at 12:30 p.m. on Mondays and Tuesdays.

Anna Feltham, principal of the East-London-based school, said: “Already many classrooms are very hot, even with fans, and pupils are struggling to keep cool, drink enough water and to maintain their concentration during lessons.”

What additional measures are schools taking?

Although not all schools are closing, every primary, secondary and sixth school is expected to take additional measures to help staff and students cope with the heat.

Rosedale Primary School in Doncaster, South Yorkshire, has announced that the school will remain open, physical education lessons will be canceled to avoid the heat.

Some classes will also be moved to cooler areas of the school and children will be kept in place during the lunch break.

DO NOT MISS :
Met Office RED warning: Terrifying danger to life in the UK [LATEST]
Only a quarter of Brits enjoy the warm weather – four in ten moan [REVEAL]
The “worst mistake” gardeners can make during a heat wave – how to prevent it [INSIGHT]

In a tweet to staff and parents, the school wrote: “On Monday and Tuesday ONLY children can come to school without uniform to allow children to wear loose, light-coloured clothing that will help them stay as fresh as possible. Appropriate clothing should be worn at school, for example no cropped tops or very short shorts.

He added that popsicles would be on sale to children for 50p, with proceeds going to cancer research, while children would be ‘encouraged not to run’ during breaks to avoid exhaustion from the heat.

St Matthias CE Primary School in Worcestershire has canceled sports day plans for this week to help staff and pupils avoid the heat.

Richmond Primary School in Hinckley, Leicestershire, is another school that has been forced to cancel sports days scheduled for next week.

What is the official guidance for schools?

In the latest update for education service providers, the Department for Education (DfE) has highlighted the government’s advice on the heatwave plan for teachers and other education and early years professionals.

The DfE said: “We are not advising schools to close during high temperatures, but school leaders should ensure they take all necessary steps to ensure children are safe and healthy. ‘easy.”

In its official gov.uk guidelines, the DfE explained that children are unable to control their body temperature as effectively as adults in hot weather because they do not sweat as much, which puts them at risk of side effects such as dehydration, heat stress and exhaustion. and heatstroke.

To cope with the heat wave, school staff were advised to follow “a battery of measures” such as: