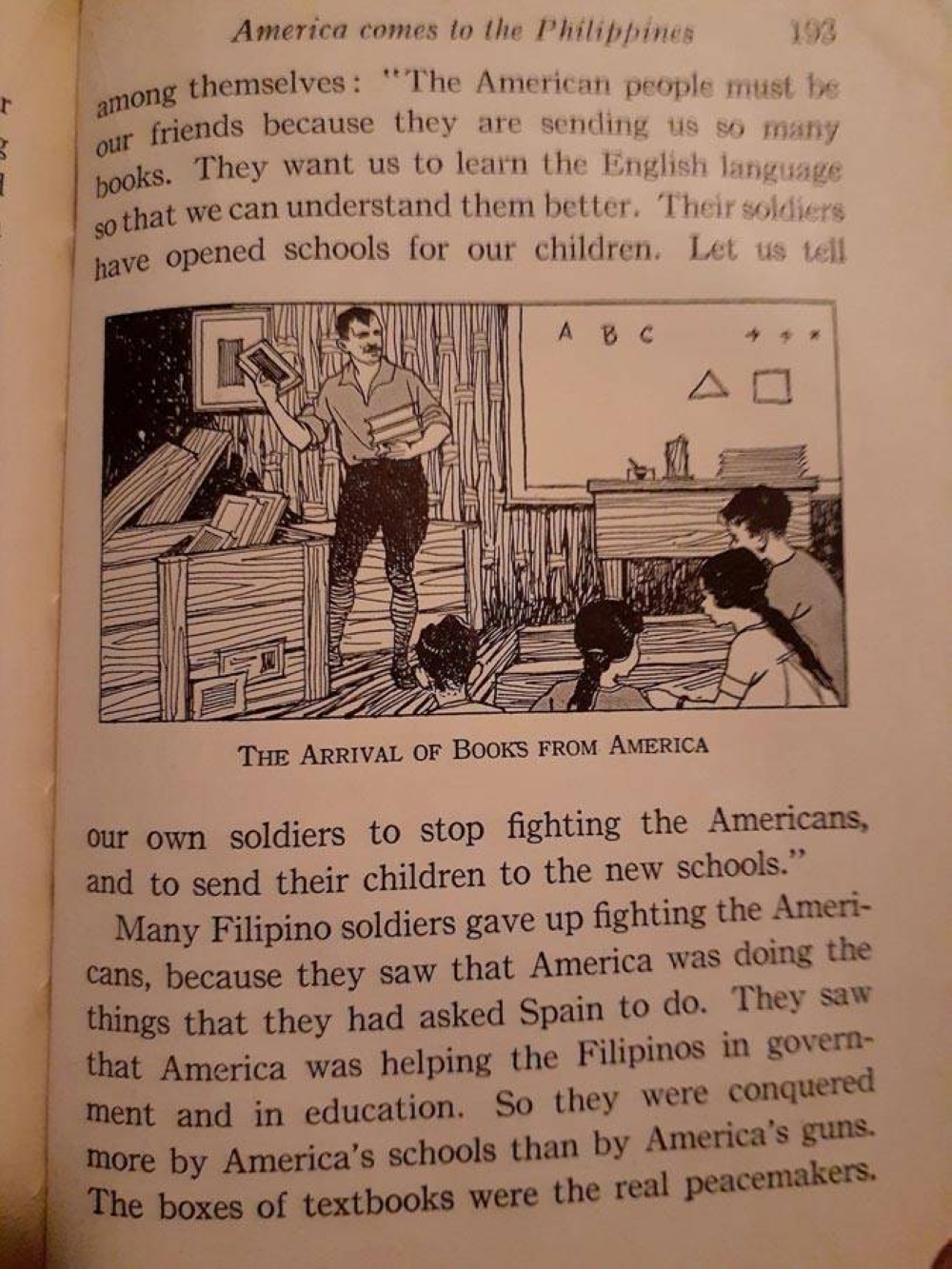 A few days ago, a Filipino cultural foundation that I really respect took to their Twitter account to post one of the photos from their very valuable collection. The photo showed a classroom, possibly in a province. The teacher, who looks American, looks at the camera, while the children are dressed in different ways: some are wearing native textiles, others show their torsos with nothing over them while others appear to be wearing clothes Westerners. No one wears shoes. On the board, different English words suggest that the children were learning the language of the new colonizer.

The image is, indeed, very interesting. What caught my attention was the accompanying text: â€œIn the 20th century, American rule helped to strengthen the Romanization of written Filipino languages â€‹â€‹across the country. Regarding this comment, I must say two things: first, there is no connection between the photo and the comment. Like I said, they were learning English. The second thing – and I believe this is more important – the Filipino languages â€‹â€‹began to be romanized since 1593, when the Spanish brothers published the first Doctrina Cristiana. This little book is very impressive: it was printed in the woodcut manner – and not following the more modern Gutenberg printing press – in two languages â€‹â€‹and two alphabets: Spanish, Romanized Tagalog and Baybayin.

Working in a very diverse archipelago with dozens of ethnicities, the brothers have found it more convenient to learn local languages â€‹â€‹to preach the gospel. Therefore, they started producing dictionaries and grammars of Filipino languages â€‹â€‹early on. According to an expert in missionary linguistics, Dr Sueiro Justel, the brothers produced at least 216 grammars and vocabularies – some of them were printed and some remained in handwritten form – of the following languages: Bagobo, Ivatan, Bicolano, Cebuano , Ibanag, Ilocano, Maguindanao, Gaddan, Waray, Isinay, Kapampangan, Ilongo, Tagalog, Pangasinense, Zambales and Tiruray.

To understand the extent of their work, it is necessary to consider the number of grammars and vocabularies produced by the brethren in the Philippines as the equivalent of production throughout Spanish America. As a result, by 1915 the most important Filipino languages â€‹â€‹and even some small languages â€‹â€‹(in terms of the number of speakers) had already been Romanized.

The link to the image also provides an interesting note: â€œPrimary school students, with the boys in camisa and the girls in baro’t saya. During the first two decades of the public school system established by the United States (1901-1920), classes were often held in private homes rented by prominent families. Note the ornate supports of the desks. â€œIn fact, the public school system has operated in the Philippines since at least 1863, just six years after the metropolis. In 1898, there were 2,192 schools for boys and girls in the archipelago. This was in fact the school system where illustrators like Isabelo de los Reyes, Pedro Paterno, Gregorio Sanciangco and JosÃ© Rizal had their first contact with numbers and letters.

One of the things that never ceases to amaze me is how many Filipinos tend to see the American Colonial period as a period of advancement led by good guys. I remember very well this sentence from a teacher in the Department of Education a few years ago: â€œThe Americans were good colonizers. This is why what they did is called ‘benevolent assimilation’. They came here to teach us what democracy is. “My eyes rolled. I said,” Really? Did the Filipinos need 45 years of American occupation to learn what democracy is?

It is truly an incredible success of American propaganda through the educational system. For example, in the book Philippine History in Stories (1928) by Conrado Benitez, intended for reading by young Filipinos, we find the following lines: â€œThe two peoples, the Americans and the Filipinos, have helped each other against their common enemy. , the Spaniards […] Unfortunately this misunderstanding (emphasis added) led these two old friends to declare war on each other. This war lasted over two years and caused the loss of many lives and destruction of property before all Filipinos finally submitted to the US government. fight the Americans, because they saw America doing the things they asked Spain to do. They saw that America was helping the Filipinos in government and in education. Thus, they were conquered more by American schools than by American arms. Textbook boxes were the real peacemakers. “

The American colonizers did their job very well in taking care of their own image and portraying themselves as saviors while they ruled the Philippines. I find that quite normal. What actually surprises me is that this completely distorted account of American colonialism, despite the abundance of evidence to the contrary, has been kept alive after independence until today.