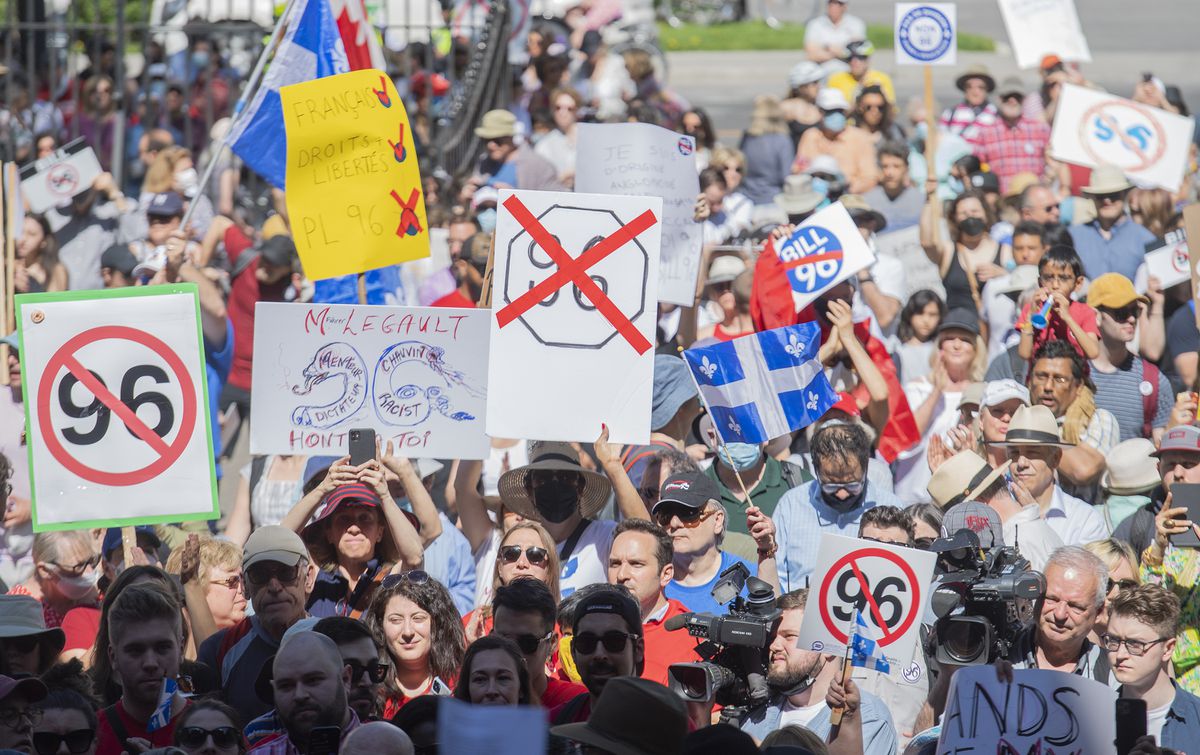 Opinion: Quebec’s Bill 96 is more a paper tiger than an attack on English language rights

Last week, Francophone Ontarians were able to see representatives of the province’s four main political parties face off in a televised debate ahead of the June 2 election. Although Francophones represent less than 5% of the population of Ontario, the debate was a fundamental proof of respect for the official language minority, whose cultural survival in the Anglophone melting pot that is North America remains a struggle continues.

Of course, it would have been nice if the leaders of the Progressive Conservatives, Liberals, New Democrats and Greens had themselves been able to debate in the language of Molière. But like most Ontarians, none of them are bilingual, so they needed substitutes to replace them.

Still, it was better than having no debate at all in their language, which English speakers in Quebec face as their province prepares to go to the polls in October. Coalition Avenir Québec Premier Francois Legault this month declined an invitation from English-language broadcasters to take part in an election debate in the language of Shakespeare, saying he would not have time to prepare for it during a busy campaign. Parti Quebecois leader Paul St-Pierre Plamondon turned down the invitation because he said French is Quebec’s only official language. Faced with the refusal of the two leaders, the organizers of the debate canceled the event.

About 9% of Quebecers have English as their mother tongue, while for nearly 14% or 1.1 million people, it is their main official language. Most of the issues that matter most to them are the same ones that concern Francophone voters. But many others are specific to them. Beyond the elementary lack of courtesy shown towards them by MM. Legault and Plamondon, Anglophones in Quebec have good reason to feel left out.

Since taking power in 2018, Mr. Legault has squandered what little goodwill he has managed to build within Quebec’s English-speaking community. His attempts to abolish English-language school boards and force English schools to ban teachers from wearing religious symbols have so far been halted by lower court rulings, but he has shown no willingness to compromise. . Even a Le Devoir columnist called his decision to cancel the $100 million expansion of an English-language college that his government had previously approved “petty.”

With Bill 96, François Legault tries to tiptoe out of the Canadian constitutional order

How we respond to Bill 96, Quebec’s language law is who we are

With Quebec’s National Assembly passing Bill 96 this week, which aims to bolster the protection of the French language in Quebec, Mr. Legault has once again thrown English-speaking voters under the bus to bolster his nationalist credentials. before the elections.

While the new language law goes too far in several respects, including preemptively invoking the notwithstanding clause and allowing warrantless searches by language police, it is not the existential threat that some Anglophone critics claim to be. It may in fact be more of a paper tiger than a law with teeth. The CAQ’s bark is worse than its bite, and the new law may end up bogged down in its own contradictions.

Indeed, its most controversial clauses – such as the one requiring the state to communicate with new immigrants in French only after a six-month grace period – risk proving unenforceable and unenforceable. In addition, the law contains specific exceptions for reasons of health, safety or natural justice. And the reality on the ground has long shown that when it comes to accommodating English in Quebec, exceptions are often the rule.

Rather, it was the way Mr. Legault governed that angered Quebec Anglophones. The Premier sees the Anglophone community as an inconvenience rather than a historical partner of Francophones in the development of the province. He was ungenerous and, yes, mean to them. He knows he doesn’t need their votes to win the next election. Indeed, he knows that any softening of his position on the rights of Anglophones could even cost him seats in French-speaking Quebec. Hence the false war of language of which Law 96 is the product.

Linguistic peace is a two-way street, however, and English-speaking Quebecers are still perceived by their French-speaking compatriots as a spoiled linguistic minority with little interest in preserving French. English-speaking Quebecers still consume surprisingly little Quebec culture and, outside a few pockets of the province, live apart from the French-speaking majority. Most can claim to be bilingual, but their definition of bilingual is, well, different from mine.

A proposal by the Liberal Party of Quebec to amend Bill 96 to require English-language college students to pass three general curriculum courses taught in French caused an outcry among parents and educators because they feared that too many English speakers fail. The amendment was dropped in favor of a less strict one. But the incident was revealing in what it said about the true state of bilingualism in English Quebec.

Yet it behooves the Prime Minister to be bigger than all of that. Mr. Legault consistently failed the test.