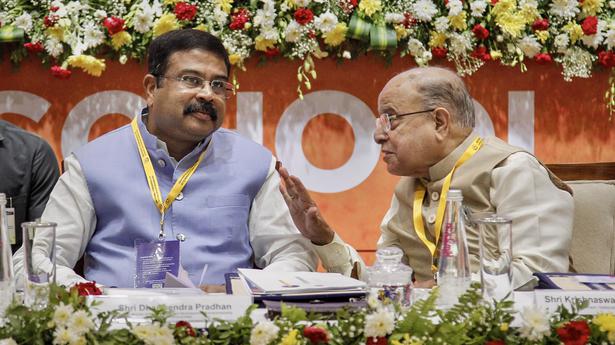 No language is inferior to Hindi or English, Union Education Minister Dharmendra Pradhan told a conference of education ministers from across the country. He said the Center would work with state governments to develop policies, like “five fingers coming together to form a fist.”

“For several days, there have been many doubts about the language issue. All languages ​​are national languages, be it Gujarati or Tamil, Punjabi or Assamese, Bengali or Marathi. No language is inferior to Hindi or English,” the minister said at the two-day conference of national education ministers in Gandhinagar, Gujarat. The conference, which brought together representatives from 32 states and union territories, ended on Thursday.

The Minister spent considerable time emphasizing the Centre’s commitment to supporting state governments in policy decision-making. “We have gathered here to learn from each other’s experiences and turn them into a cumulative force. It’s like five fingers joined together to form a fist, so that 40% of our population, between the ages of 3 and 23, can become the citizens of the world of the 21st century.

He said that during his travels across the country, he learned from different states about the innovative methods adopted by them in the field of education, such as Karnataka’s efforts to improve learning losses during the pandemic, or a village in Odisha where learning materials were disseminated in the local tribal language or in Delhi where patriotism was promoted in schools.

“You know best what the needs of the children in your home are. You will show us the way and we will work together,” he said.

The Minister also announced a new program called “PM Shri Schools”, which he said would be a step ahead of exemplary schools such as Kendriya Vidyalaya and Navodaya Vidyalaya.

“There are a total of 15 lakh schools in the country, of which 11 lakh are public schools. Of these, 1% will be PM Shri schools under a new scheme which will be framed after consultation with you. PM Shri schools will be a laboratory of national education policy. It will set benchmarks to prepare youth for the 21st century,” he said in his address.

The minister said that since “colonial rule was established by subduing the education system”, now was the time to come out of the slave mentality and decolonize the system so that India can have knowledge-based leadership. through school education as a basis.

Talking about this year’s budgetary provisions for the use of technology in education, he said that ₹1,000 crore had been allocated which would be used for the introduction of 200 TV channels, which would include one channel for each class from class I to XII, and the creation of programs. for different course periods as well as virtual labs.