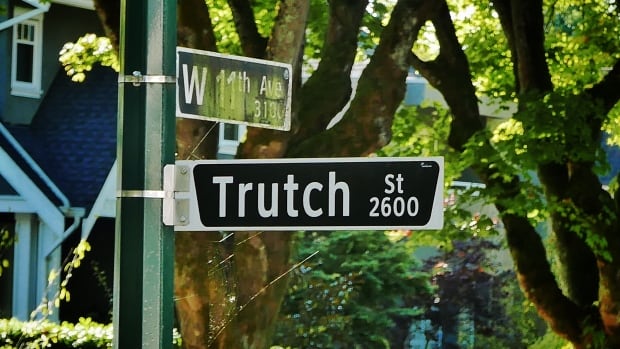 The xʷməθkʷəy̓əm (Musqueam) Indian Band has given a new name to a street in the Kitsilano neighborhood of Vancouver — Musqueamview Street in English and šxʷməθkʷəy̓əmasəm in the national language hən̓q̓əmin̓əm̓.

It comes after a unanimous vote by the city council in July 2021 to replace the name of Trutch Street, located between Bleinheim and Balaclava Street in the western part of the city.

Musqueamview Street is 16 blocks long, with its northern end near the water at Jericho Beach and the southern end near Carnarvon Park. His name hən̓q̓əmin̓əm̓ is pronounced sh-muck-wi-um-awe-sum.

The street — originally named for Joseph Trutch, British Columbia’s first lieutenant governor — was renamed due to Trutch’s racist policies against Indigenous peoples, including reduce the size of reserves and refuse to let Native people are buying land from non-Native people.

“This is something that’s been in the works for many, many years – probably decades,” sʔəyəɬəq (Larry Grant), the head of the Nation’s language department, said at a ceremony Friday to announce the new name. from the street.

Four witnesses joined Grant on Friday in a ceremony on the National Day for Truth and Reconciliation – two from xʷməθkʷəy̓əm, təlnaq̓ə (Alec Guerin) and mən̓eʔɬ (Johnny Louis), and two from the city, Mayor Kennedy Stewart and City Manager Paul Mochrie.

“I’m excited for the next chapter of this street and what it means for Vancouver,” Mayor Kennedy Stewart said in a statement.

The Kitsilano neighborhood holds many important sites for the xʷməθkʷəy̓əm people, including what is now Jericho Beach.

Truly an honor to witness the @musqueam naming ceremony for a new name for Truthch Street in Vancouver on #NationalDayForTruthAndReconciliation#EveryChildMatters #NDTR #OrangeShirtDay2022 image. twitter.com/TFg0aprsEH

“Our previous councils tried to find a way to remove and change that Trutch name,” sʔəyəɬəq said. “It doesn’t represent anything very nice.

“It represents a person who could be described as savage, uncivilized…but educated.”

The new name is the result of a collaborative effort between the band’s language department and the council, according to a statement xʷməθkʷəy̓əm.

təlnaq̓ə said at the ceremony that witnesses were required as part of the xʷməθkʷəy̓əm tradition, since the Nation had not had a written history for many years and relied on oral history.

He said the City of Vancouver was taking the “first steps” of important reconciliation work and removing a memorial to a racist man and one of the first colonizers.

“It is important … that we replace the monument to Trutch with our language, with our identity in our territory,” he said.

On the somber National Day for Truth and Reconciliation, Chief xʷməθkʷəy̓əm yəχʷyaχʷələq (Wayne Sparrow) said reconciliation was just a word and governments must take action to right the wrongs Indigenous Peoples.

“Our survivors who left, our leaders who left us, I know you look down on us today and this incredible crowd that we have gathered here,” he said.

“Each of you has a job to do, to continue the work that is being done.”

streets and establishments around British Columbia that were named for Trutch were recently renamed following a reassessment of his racist and colonizing heritage.

In Victoria, what was Trutch Street once is now səʔit Street, pronounced say-eet.