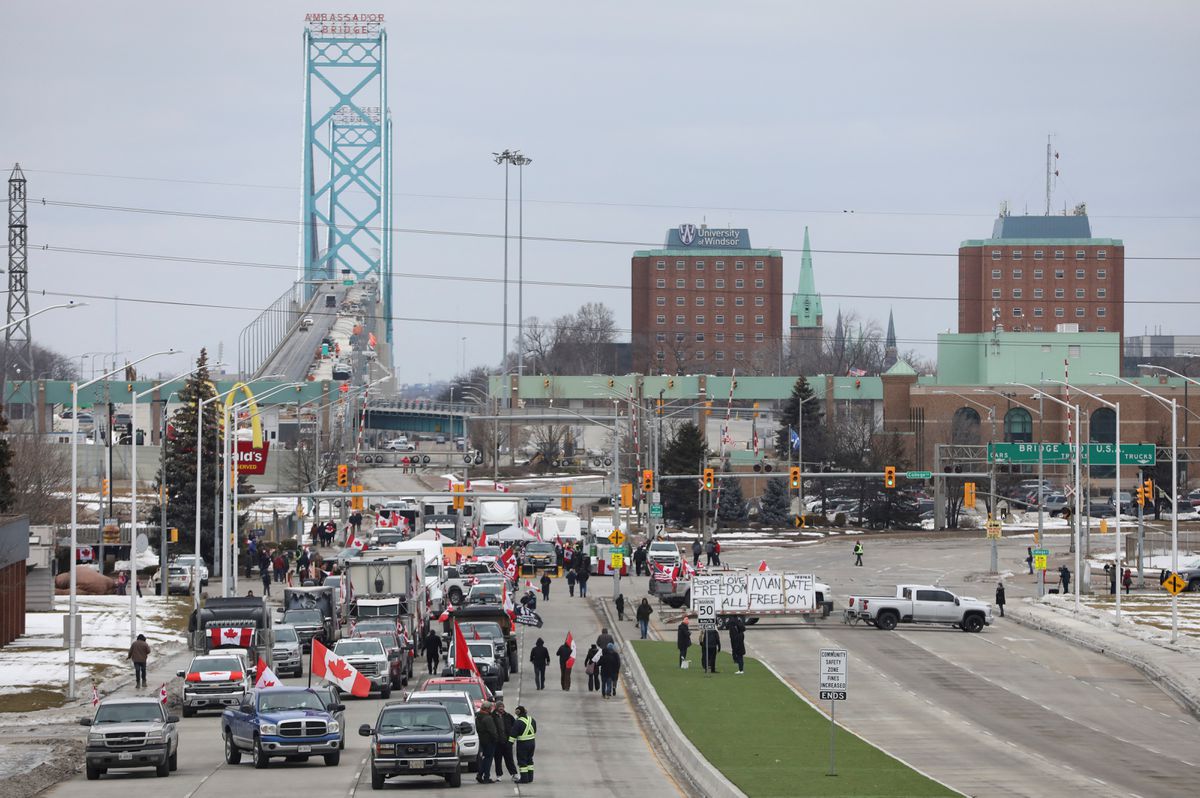 The Ontario government is preparing a series of measures in an effort to break the impasse at the Ambassador Bridge and reopen the most important trade link between Canada and the United States, according to two sources with direct knowledge of the plans.

Premier Doug Ford intends to crack down on protesters, a source said. In addition to painful fines and possible confiscation of vehicles, the source said the province is also considering its options for suspending business licenses.

The measures will be implemented within the framework of existing legislation, but also by modifying regulations and laws to give prosecutors the legal power to act against protesters, they said. The Globe and Mail does not identify the sources because they were not authorized to release internal deliberations.

This is Morning Update’s daily newsletter. If you read this on the web, or if it was forwarded to you by someone else, you can subscribe to Morning Update and over 20 other Globe newsletters on our newsletter subscription page.

Ukraine has called for Russian ships to be barred from international ports after Moscow announced week-long naval exercises in the Black and Azov seas that Kiev says amount to a de facto blockade.

The tension off Ukraine’s southern coast came as British Prime Minister Boris Johnson warned during a visit to NATO headquarters on Thursday that the next few days represent “the most dangerous moment” in the crisis created by the military reinforcement of Russia around Ukraine.

Ukraine has said live-fire Russian naval drills, due to start on Sunday, will make it “virtually impossible” to sail to and from high-traffic ports such as Odessa, Mykolaiv and Mariupol.

Canada’s national synchronized swimming program, which has been hit by allegations of abuse and mistreatment by several former Olympians who say they were pushed into dangerous eating disorders, has introduced new policies it says , will better protect athletes.

Benoit Girardin, a sports lawyer and professor who was hired by Canada Artistic Swimming to draft the new policies, said the changes will create a more independent system for handling and investigating complaints from athletes in the program.

In particular, the organization itself will no longer be able to exercise direct control over how allegations of abuse are handled and whether complaints from athletes can be addressed.

ALSO ON OUR RADAR

The US House launches an investigation into Trump’s White House archives: Former US President Donald Trump is being investigated by a US Congressional committee for his handling of White House records after 15 boxes of documents were transferred from his Florida compound to a federal agency, a federal agency said. panel chair Carolyn Maloney on Thursday.

London Metropolitan Police Commissioner resigns after controversy After months of calls to step down, Cressida Dick has stepped down, bowing to mounting criticism following the recent release of an internal report that exposed widespread racism, misogyny, harassment, homophobia and intimidation among officers.

European stock indices fell on Friday and the US 10-year yield held steady near 2% after searing US inflation figures prompted investors to expect monetary policy tightening from the Federal Reserve. Consumer prices in the United States posted the largest annual increase in 40 years, according to data released Thursday evening. The MSCI World Equity Index, which tracks stocks from 50 countries, fell 0.4% on the day. The Canadian dollar was trading at 78.60 cents US.

WHAT EVERYONE IS TALKING ABOUT

Despite Putin’s obsession, NATO’s new life is an illusion

“Sir. Putin’s newfound obsession with NATO has had a number of effects. One is to force a lot of Western nations to dust off their tanks. Another is to make the 30-nation alliance believe that ‘she has a new sense of purpose. … But now isn’t the moment NATO might seem to be – largely because the alliance has little to do with the threat against Ukraine, or its likely response.” – Doug Saunders

“While eliminating single-family zoning may seem like a break from tradition, exclusionary zoning policies are the real aberration.” – Steve Lafleur

EDITORIAL MAPPING OF THE DAY

When to start planting seeds indoors? Check your freeze date

With winter halfway through and spring looming on the horizon, many gardeners dream of sunny days and dirty fingernails. For those looking to jump into the growing season, starting seeds indoors offers the most productive option.

Before you dig, though, figure out exactly when to start, which means finding the average last frost date in your area.

About a decade before his death at the age of 89, Alban Michael recounted a dream in which his mother and father spoke in Nuchatlaht, as they had when he was a child. At the time this story was published in 2005, such a conversation could only have taken place in his dreams: Mr. Michael was the last known speaker of Nuchatlaht, a dialect spoken by members of the Nuchatlaht First Nation, a Nuu -shah-null nation whose traditional territory is on the west coast of Vancouver Island. In this 2005 account, he told Victoria Times Colonist reporter Jack Knox that he hadn’t learned English until he went to boarding school in Tofino, where an English-only rule was enforced, sometimes with a webbing. He clung to the Nuchatlaht language because his parents spoke it; after their death, there were no more conversations. Prior to his death, he was recorded speaking approximately 1,100 words and 600 phrases as part of an online language database maintained by FirstVoices. The loss of Indigenous languages ​​is considered one of the most detrimental and profound effects of the residential school system. In 2019, Canada passed an Indigenous Languages ​​Act to support the efforts of Indigenous peoples to revitalize their languages. Wendy Stueck

Subscribers and registered users of globeandmail.com can dig deeper into our news photo archive at tgam.ca/newsphotoarchive

If you wish to receive this newsletter by e-mail every morning of the week, go here register. If you have any comments, send us a note.