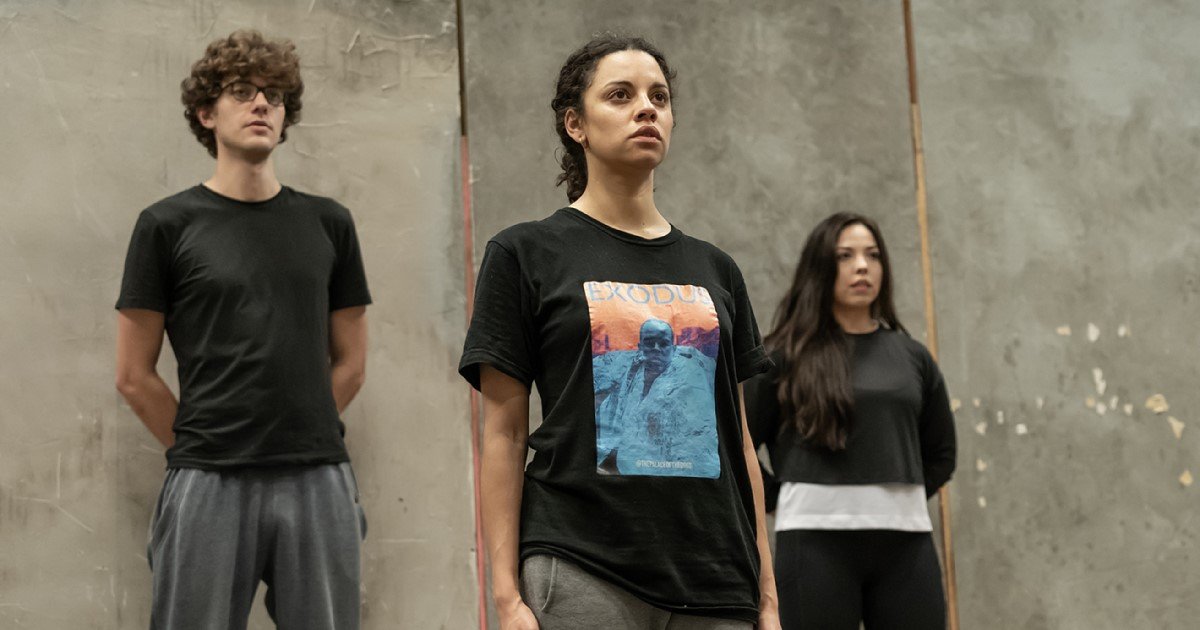 Shakespeare’s ever-popular play is a gripping study of nationalism, war and the psychology of power. Kit Harington leads the cast in an exciting modern production directed by Donmar Associate Director Max Webster, exploring what it means to be English and our relationship to Europe, asking: do we ever get the leaders we deserve?

Q: What attracted you to this production of Henri V?
AL: Well, first of all, I’ve never done Shakespeare, and as an actor I’m always looking for things to challenge myself – Henry V seemed like a nice big challenge to start the year off with. On top of that, it’s a play about imperialism, nationalism and war, a lot of traditionally ‘masculine’ themes, and I found myself really interested in that because it’s so far from what I usually addresses.

Q: Can you tell us about the characters you play?
AL: I play Katherine of France, who should marry Henry if he wins the war – and I also play a British captain called Gower.
Both characters are powerful women, but in very different ways: Gower is a highly capable army officer whom we meet in the midst of battle, while Katherine moves entirely through political and domestic spaces. They are both very cool women and I like them very much!

Q: How does this production compare to more traditional Henry V productions?
AL: I think we really dig into the darkness of this show in a way that I find really exciting. What does it actually mean to invade another country? What drives this? What is the reality of war and the cost to the real soldiers involved in it? Is patriotism a good or a bad thing? And other big questions about power, gender and Europe.

Q: What can you tell us about the rehearsal process?
AL: It was very physical! Max Webster wanted us to understand what it’s like to be a soldier, so we had drills every morning of rehearsals, led by a lovely ex-marine named Tom, and we also did a lot of movement with Benoit Swan Pouffer, who is incredible, as well as obviously a lot of stage work with Max and Dadiow.
It’s been an incredibly bonding way to rehearse as we all move together every day. He was also quite sweaty.

Q: You are a ‘singer, songwriter, composer, actor and theater maker’. How does it all gel?
AL: This question made me laugh out loud. The honest answer is I don’t know, I’m trying to find a solution as I go. I’m incredibly grateful that people ask me to do any of these things, I didn’t really have a plan beyond being a singer/songwriter so I’m just thrilled to find myself engaged in so many activities creative things that teach me things.

Q: How have you coped with the pandemic?
AL: I played the piano a lot, I think maybe I wrote an album, I just need to find time to record it. I’ve been incredibly lucky to be able to work on enough projects to support me financially and emotionally, which still seems kind of crazy. I’ve written an awful lot, which I think is how I’ve stayed sane in the darker parts – but I’ve also really figured out who I love and who loves me, and I think the main way I coped was to solidify the relationships I have around me. Which is a verbose way of saying that my friends and family helped me.

Q: Looking ahead, what would you like to do for the rest of 2022 and beyond?
AL: I have a few things in the pipeline that are half-baked, so there are workshops and R&D of shows that I’m writing about and I really hope we can pull it off, and ultimately, I’d like to share those pieces with the world. If I had a million pounds I would go into the studio tomorrow with my band and release my next album, but there’s a little more planning involved in that. Other than that, I would love to lay on a very warm beach.