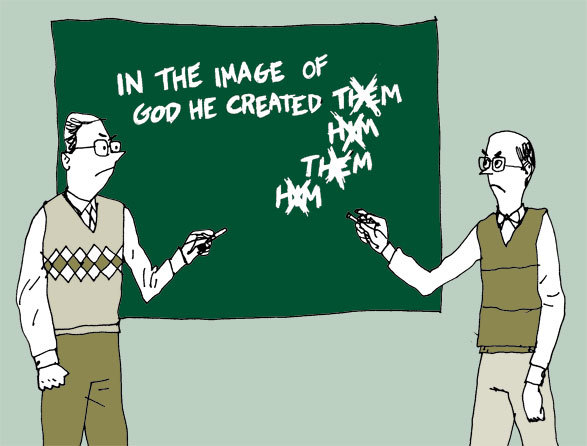 Hanging on to God and grammar

In the past, progressive politicians described those they despised as clinging to “God and Arms.” I suspect we are not far from a time when they will insult those they deplore for clinging to God and grammar. It may sound like an odd claim, but the days are quickly ending when it was morally acceptable to think that language, among its many functions, had a positive relationship with reality. Today, dictionaries and grammars seem to become relics of a bygone era of evil oppression.

Take, for example, the trend to specify preferred pronouns on everything from Twitter to business cards, a fascinating sign of our times. Even some Christians participate. Whether people do it out of genuine confusion, out of a positive commitment to queer theory, or in the preemptive expectation that it becomes the equivalent of Havel’s greengrocer sign in our new world, it’s action. that most would have considered absurd even five years ago. Most (probably) still consider it absurd today. But that old consensus is crumbling, like all other once-indisputable Western cultural beliefs. Homosexuality is rapidly evolving from an obscure and implausible theory to a practical, everyday reality.

While many on the right reject accusations of cultural Marxism when faced with such iconoclasm, I would argue that this latest trend is not so reminiscent of Friedrich Nietzsche’s haunting statement in Twilight of the Idols: “I’m afraid we don’t get rid of God because we still believe in grammar. It sounds strange, but in the context of his argument, it makes sense. What Nietzsche is saying here is that language makes us believe that it expresses reality but that it does not; on the contrary, it constructs concepts that it presents as real and seductively traps us in thinking about the world in a particular way.

If there ever was a philosophical position which placed the individual and his will (or his will) at the center of the universe, then this is it. Such radical nominalism can be nonsense but, like sex, it sells, appealing to our intuitive sense of freedom and our desire for autonomy. And much like current attitudes towards sex, it recreates the purpose of the world by making us feel good about ourselves. He does this by claiming that God – and everything He created, from masculine and feminine to notions of good and evil – are simply linguistic constructs, mere scams that capture the imagination of the thoughtless flock.

Nietzsche was far-sighted. The current battles for the future form of Western society are fought with the most ferocity in the realm of language. It wouldn’t be so disturbing if the fight was to make language conform to reality. For example, to oppose a demeaning racial epithet would seem not only philosophically legitimate but morally imperative, a way to prevent the constructed category of race from being used to demonize another human being.

Human nature is real; we all share it, and that imposes moral responsibilities on us. But when we denounce the pronouns that assume the reality of bodily sex, we come close to denying the universal truth that all humans are embodied beings. Indeed, we are tearing away the very foundation on which a common humanity and a common humanitarian ethic can be built.

Josef Pieper expressed a vision similar to that of Nietzsche, although he does so with apprehension and fear rather than joy, and with much more political prescience. In an important essay, â€œThe Abuse of Language and the Abuse of Power,â€ he observed:

Once the word, as used by the media, has, on principle, been made neutral to the norm of truth, it is, by its very nature, a ready-to-use tool. which only asks to be taken up by â€œthe powers that beâ€ and â€œemployeesâ€ for violent or despotic ends.

Pieper says that once language is detached from any larger reality, it becomes a weapon in the hands of the powerful for the manipulation and abuse of others. When we consider this in light of Nietzsche’s observation on God and grammar, a rather dark truth becomes evident: the abolition of grammar only changes one authority for another. The old God could be held to his word (forgive the expression), as it is reflected in reality. The new gods are only raw power in the broad sense, unrelated to anything beyond themselves.

Ironically, this means that what Nietzsche feared above all – the herd mentality and its insane morality – is precisely what will emerge, for the individual has nothing to resist the power of the strong. This is what we are seeing in the thoughtless rush to specify pronouns in people who have never viewed their bodies as unreliable guides to their gender.

The battle for pronouns on social media and in public spaces, trivial as it may sound, is actually of great importance. The abandonment of reality that queer ideology demands can be presented as a simple sensitivity to the feelings of others, but in fact it imposes a vision of the relationship between language and reality that makes the latter irrelevant. more than a function of the first. . And the reason it is being pressed with such force is that it is an offer of power by those who judge all categories of oppressive except those which they themselves invent.

They hate reality. And they hate the God who made this reality and the grammar and syntax by which it is expressed. Nietzsche knew it; it’s a shame that some Christians seem rather confused about this.

And as for the politicians who despise those who believe in a God-given reality: you can take my grammar and my dictionary from me when you snatch them from my cold, dead hands.

Carl R. Trueman is Professor of Bible and Religious Studies at Grove City College. He is a esteemed church historian and was previously a William E. Simon Fellow in Religion and Public Life at Princeton University. Trueman has written or edited over a dozen books, including The rise and triumph of the modern self, The Creedal Imperative, Luther on the Christian Life, and Stories and Fallacies.

Practice of English by English applications