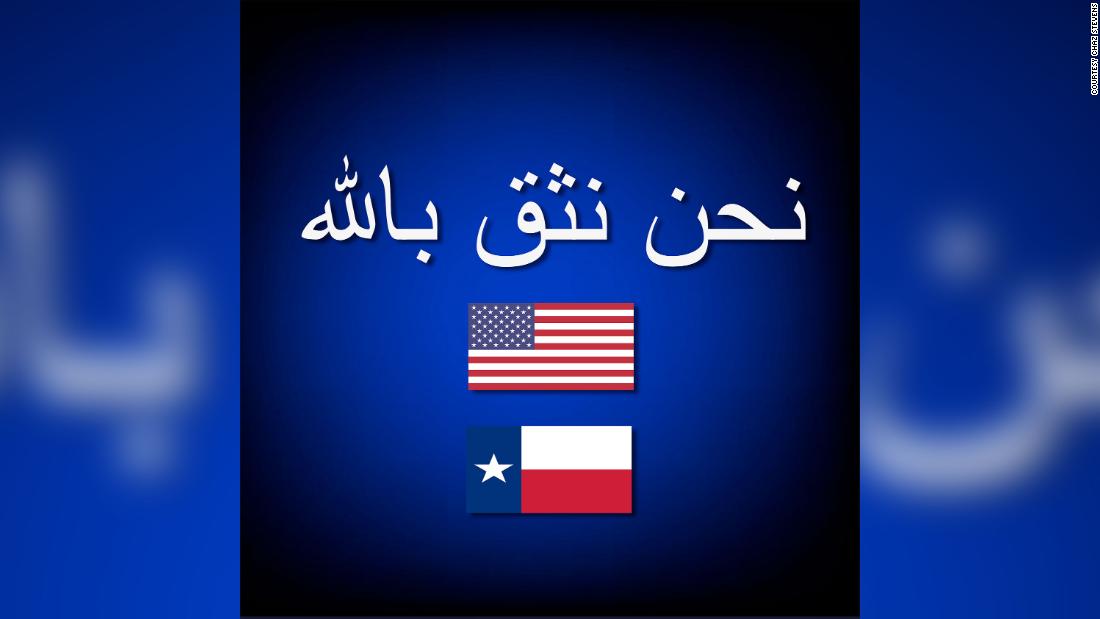 “The law apparently assumes these signs are written in English. Oopsie,” said GoFundMe organizer Chaz Stevens. “We will be donating hundreds of Arabic-language ‘In God We Trust’ posters to schools across Texas, flooding the public school system with our Arabic-language IGWT artwork.”

“In God We Trust” in Arabic for the signs.

Stevens expects those efforts to be over soon. “Once that’s done, we’ll update our artwork, send it to printers, and forward it to various ISDs in Texas,” he said.

“Future artwork will include not only Arabic, but also Hindu, Spanish, Chinese and possibly African dialects,” he told CNN.

When asked if he expected the matter to go to court, Stevens told CNN “gold rules, so it’s definitely an uphill battle with the odds against me.” .

“To me, it’s not about…Texas telling me no…rather, I see it as another example of a rapidly expanding problem of ‘First Amendment dilution – clause of establishment and all. My fight is not just in the Lone Star State, but a nation wide call to arms,” Stevens said.

University of North Texas political science professor Kimi Lynn King, who specializes in American politics, including civil rights and liberties, conflict resolution, judicial decision-making, legislative oversight of bureaucracy and decision-making of administrative agencies, told CNN that on its face, Senate Bill 797 does not specify language “despite being particularized (and narrow) regarding how signs should be configured”.

“One could argue the plain meaning of the legislation by spelling it in English, represents an intention to make it a government-sponsored speech with a specific message it wishes to convey,” King said. “On the other hand, it could be argued that the law is vague in that it does not indicate that it could NOT be written in other languages.”

King says that if the law itself were to be challenged, the Texas government would likely defend the expression as “government speech,” which carries more weight and greater protection for sovereign expression.

She pointed out that U.S. District Judge Aleta A. Trauger in Tennessee upheld the “National Currency in the Classroom Act” of 2018 in May, noting in her view that similar challenges had been raised and that ‘the national motto is a ‘symbol of common identity.'”

King said Texas, Tennessee and a number of other states with similar laws in effect “make this a perfect storm ripe for Supreme Court review.”